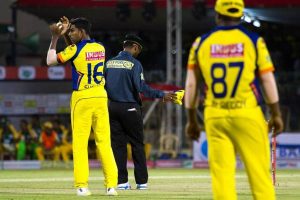 KPL 2015 Match 22: Bijapur Bulls defeat Mysuru Warriors by 7 wickets: Mysuru Warriors’ unfortunate tournament continues as they faced their 4th defeat in 5 matches and now made their playoff chances critical. Bijapur Bulls chased down Mysuru Warriors’ 167 by losing 3 wickets and 2 balls to spare. The defending champions now need to win in their both games and expect a couple of results going on their way as well.

Bijapur Bulls asked Mysuru Warriors to bat first after winning the toss. CM Gautam, who missed out previous game due to injury came back into the side and took the captaincy duties as Mysuru Warriors will be missing services of Manish Pandey remainder of the tournament as he will be part of India A.

Captain Gautam opened the innings along with Arjun Hoysala as Warriors got off to a great start. Especially, Gautam played with extra responsibility as he kept striking some good shots at start. However, inform batsman Arjun Hoysala departed for 13 after sharing a little good stand of 35 with Gautam.

Gautam continued to steady the ship with MG Naveen playing some good strokes on other end. They both played had a good stand going between them till Naveen returned to pavilion after scoring 22 with 4 boundaries. Another experienced batsman Manjesh Reddy got a start before he was runout unfortunately. Manjesh got out for 18 with Mysuru Warriors’ score at 109 for 3 in 16 overs. CM Gautam, who brought up his fifty in just 40 balls gave up his wicket in cause of quick runs as he departed for 58 which came off 52 balls with help of 4 fours and a six.

But young all-rounder Jagadeesha Suchith didn’t allowed his side to finish at a modest of totals as he created a carnage in last 2 overs piling up 47 runs. His innings of 54 contained 6 sixes and 3 fours. He struck hat trick sixes in Mithun’s bowling on last 3 balls of Warriors’ innings and brought up his fifty in just 15 balls, jointly the record for the fastest fifty in T20 format on Indian soil. With help of some late blasts from Suchith, Warriors finished at a good score of 167 for 5.

Chasing 168, Bijapur Bulls got off to a great start as they stormed to 61 for no loss in powerplay. Gautam tried to restrict the opposition after the powerplay and succeeded it. Warriors’ best bowler, Suchith got rid of Bhatkal who scored a quick fire 40 as he was stumped by Gautam behind the stumps. At halfway stage, Sunil Kumar sent the other opener, Samarth to pavilion who holed out to Suchith at long-off for run a ball 34.

Bijapur Bulls, slowly crawled to 104 for loss of 2 wickets at end of 14th over needing another 64 runs in 6 overs. However, Suneel Raju smashed a couple of sixes before giving a catch to Suchith in bowling of K Gowtham. With some clean striking from Robin Uthappa, who had a great stand going with Nidesh followed in last 5 overs, Bijapur’s win got settled as they chased down the target with another 2 balls to spare.