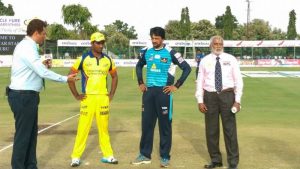 KPL 2015 Match 28: Mysuru Warriors trash Rockstars in their final league game: Mysuru Warriors ended their KPL 2015 campaign with a huge win against Rockstars at their home ground. The defending champions, who batted first, put on a big score of 175. Later the home side restricted the Rockstars to just 100 and won by 75 runs.

Mysuru Warriors’ captain elected to bat first after winning toss and opened the innings along with Arjun Hoysala. Gautam who played some good knocks in previous games kept going in this game as well. On other end, Arjun Hoysala, who is among the leading run scorers for this edition of KPL, finished his campaign with a brilliant knock.

Gautam played sheer anchor innings while Arjun kept the runs coming a quick pace. Arjun brought up his fifty in just 32 balls before the century opening stand was brought to a very end. A misunderstanding led to a setback of CM Gautam who made a brilliant 42 runs in the 110 run stand which was brought up in 13 overs.

Mysuru Warriors lost another 3 wickets quickly including Arjun Hoysala who blasted a 75 in just 48 balls. But it brought the 15-year old Nikin Jose to the crease, who became the youngest player to make KPL debut. Nikin Jose utilized his much awaited opportunity to the core as he collected quick runs towards the end with some interesting shots. He picked up a boundary with a ‘Dil scoop’ and slogged a six over long-on fence before getting out on the last ball of the innings after making crucial contribution of 25.

Chasing a huge total of 176, Rockstars had to play aggressive straightaway but Mysuru Warriors’ bowlers didn’t let them off the hook. Raju Gowda started Rockstars innings with a four but his innings ended on the last ball of first over as David Mathias provided the breakthrough. Later, Mathias sent Raahul cheaply in his next over. K. Gowtham & Suchith picked up a wicket each as the Mysuru Warriors had the top 4 back in the hut by the 8th over. On other end, Charan Tej played a good hand for Rockstars by hitting some lusty blows but he was dismissed for 40 by Nikin Jose, who picked up his first wicket in KPL.

Nikin struck twice in his 2nd over by dismissing Rockstars’ captain Sudeep and veteran player Sunil Joshi. His dream debut continued as he bagged another 2 wickets in his 3rd over and became only the 3rd player to pick 5-wicket haul in KPL. That achievement lasted for just 1 over and he set a new record by picking up his 6th wicket in his final over, and became the first player ever to take 6 wickets in an innings in the 4 editions of KPL history.

Man Of the Match – Nikin Jose