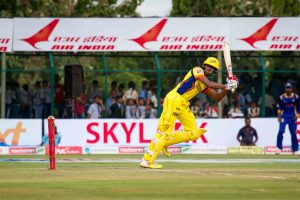 Suchith had a dream outing since KPL 2014 season, where he was the leading wicket taker of the edition with 16 wickets while playing for Mysuru Warriors. Later he was picked up by the star studded Mumbai Indians in IPL and continued to put on a good show everywhere he played including the ongoing 4th edition of KPL.

However, Suchith didn’t have best of starts as he went wicket less in first match against Namma Shivamogga and conceded 33 runs in the 3.2 overs that he bowled. In the 2nd game against Mangalore United, he claimed the wicket of Shishir Bhavane but gave 30 runs in 4 overs. He didn’t start well with the bat either, scoring just 2 and 1 respectively.

But he peaked his performance from the 3rd match and was unstoppable after that. Against Bellary Tuskers, he picked up 5 wickets and reduced the opposition to just 122. With the 5-wicket haul, he then became only the 2nd player to pick 5-wicket haul in KPL history. His figures of 4-0-20-5 were 2nd best bowling figures for a player in KPL and led his side to first win of the season.

He recorded figures of 2-0-6-2 in the following game against Belagavi Panthers in the rain hurtled game, where he picked up wickets of Vinay Kumar & Abhishek Reddy who were the only contributors towards their side’s total. Suchith could only add 10 runs in the 4 games with the bat. But it was the silence before the storm.

Against Bijapur Bulls, he played a quick fire innings towards the end. He scored an unbeaten 54 in just 15 balls by striking 3 fours and 6 sixes. He yielded 23 and 24 runs from 19th over bowled by Appanna and 20th over bowled by Mithun respectively. He struck hat-trick of sixes to finish the innings and bring up his fifty in just 15 balls, equaling Yusuf Pathan’s record for fastest fifty in T20s on Indian soil. Later with the ball, he picked up crucial wicket of Raju Bhatkal and recorded figures of 4-0-23-1.

In the penultimate game, Suchith was a bit expensive with the ball going for 35 runs in his 4 overs but got the wicket of D Negi as the same time. Later, with the bat he smoked a quick 27 with 4 fours in just 16 balls and kept his side’s hopes on the chase alive till he was at the crease.

He finished the season by collecting 11 quick runs in 6 balls against Rockstars with bat and picked up the wicket of experienced player Mohan. He finished with figures of 4-0-27-1 in the game. Also, Suchith was a safe fielder as he caught 6 catches in the tournament and can be referred as an all-rounder.

In overall, with 11 wickets in the tournament, Suchith stood as 2nd leading wicket taker in league stage. Also, his 7 sixes with bat were most by a Mysuru player and jointly 5th most in the tournament.

Interestingly, all these performances from Suchith have come before he turned into a regular player in state’s domestic side. With the prospects he is showing, he will surely find himself a part of the Karnataka team and an India call might be in the reckons as well.