KXIP would, well and truly, remember that Rahul Tewatia did to them in their previous meeting.

Kings XI Punjab (KXIP) have turned out to be a brute force to reckon with in the 2020 edition of the Indian Premier League (IPL). The KL Rahul-led unit have won five matches on the trot and have moved up from the bottom of the points table into the top four.

In their previous contest, the Mohali-based franchise got past the Kolkata Knight Riders (KKR) by eight wickets at the Sharjah Cricket Stadium. In their next match, they will be locking horns with the Rajasthan Royals (RR) on Friday, October 30 at the Sheikh Zayed Stadium in Abu Dhabi.

Punjab will remember what the Royals and Rahul Tewatia did do them last time around, though it was in Sharjah. Going into the game, RR will be high on confidence after beating the Mumbai Indians (MI) at the same venue. A cracker of a game can be expected.

The pitch in Abu Dhabi has been an excellent one for batting and bowlers have indeed found it tough. The batters have made hay in the powerplay and in the death overs, they haven’t lost a whole lot of wickets either.

Chasing should be the way forward on the strip. The playing conditions will be warm with the temperature around the 29 degrees Celsius mark. The humidity will be in the 60s.

Playing Combinations for KXIP vs RR

KL Rahul has been in jaw-dropping form in the ongoing edition of the T20 league. The right-hander is on the verge of 600 runs, having scored 595 runs at an average and strike-rate of 59.50 and 132.22 respectively.

He has been one of the primary reasons why Punjab have been able to make a comeback. That he scored a fifty in KXIP’s previous outing against RR would also give him confidence.

Ben Stokes was earlier getting starts, showing his class, but he wasn’t able to carry on and make them count. However, the England cricketer made amends scoring his second IPL ton since 2017.

He was again sent to open the innings for the Royals and he came into his own. Not only did he score a ton, but also stayed unbeaten until the very end. The southpaw can again be expected to weave magic.

KXIP vs RR Head to Head 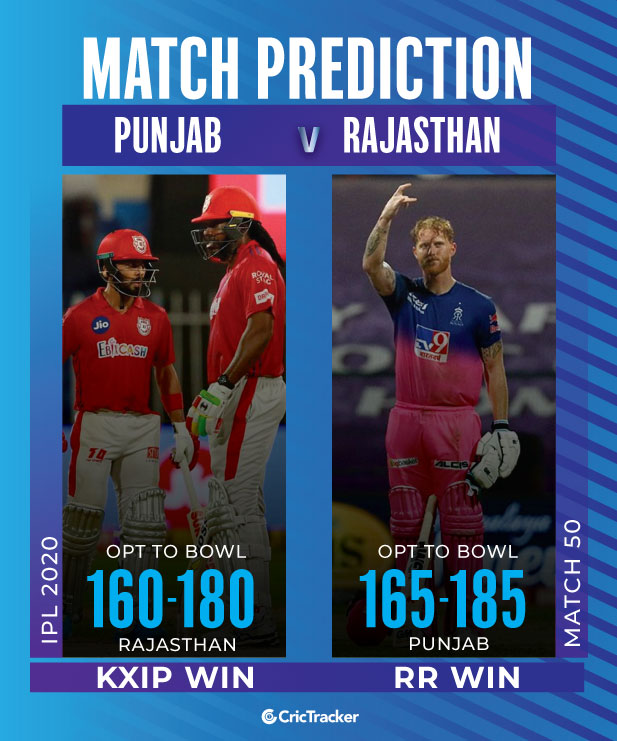