Though on the head-to-head count the Zalmi are ahead, on current form, the Qalandars can be said to have the upper hand.

For Lahore Qalandars, their outing in the 2020 edition of the Pakistan Super League (PSL) was similar to the fairytale. After finishing at the bottom for four seasons in a row, the team, led by Sohail Akhtar, made their way through to the final where they were defeated by the Karachi Kings. Their opening game in PSL 2021 is against Peshawar Zalmi on Sunday at the National Stadium in Karachi.

Though on the head-to-head count the Zalmi are ahead, on current form, the Qalandars can be said to have the upper hand. The fact that the Qalandars have roped in Rashid Khan has made their bowling attack a lethal one. The Zalmi, on the other hand, have tasted success in the PSL, but couldn’t make the final last time. Wahab Riaz’s men also have roped in some crucial players.

The pitch in Karachi has generally been a sporting one. But in the last edition, it favoured the team batting second. Hence, chasing should be the way forward for the teams. The temperature is expected to be around 33 degrees Celsius. The humidity won’t be high with the numbers in 10s.

Playing Combinations for LAH vs PES

Rashid Khan has been a hot prospect in T20 leagues around the world. He is expected to weave magic for the Qalandars right away. He had a decent season for Adelaide Strikers in the BBL 2020-21 with the ball in hand. Not to forget that the Nangarhar-born is more than handy with the willow in hand.

Kamran Akmal might not be in the Pakistan national team, but the fact that he is one of the most destructive batters in the country can’t be denied by any means. He is the all-time leading run-scorer in the PSL. In the previous season, he got a ton and even into his late 30s, he would be looking to make an impact.

LAH vs PES Head to Head

The prediction is for Lahore Qalandars to win the match. 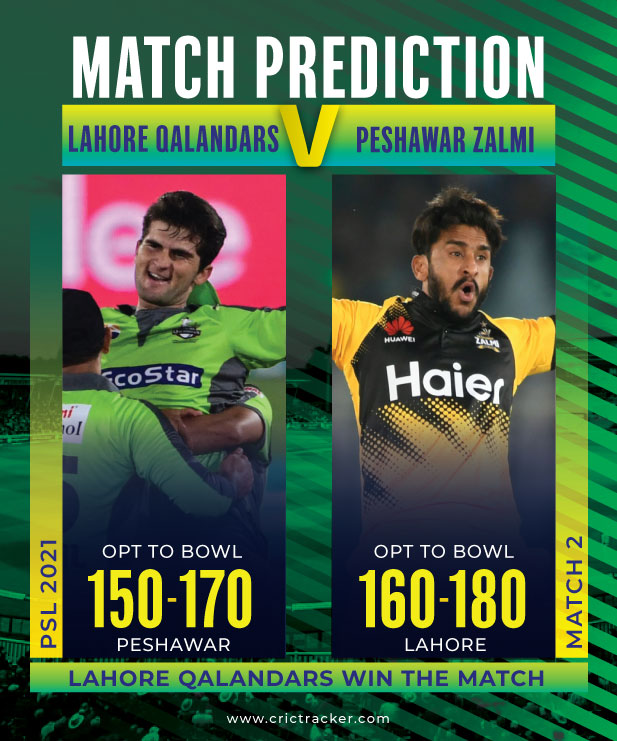