It is advisable to include more local players in your fantasy teams.

The 2nd edition of the Lanka Premier League is all set to get underway from December 5th. Colombo Stars, Dambulla Giants, Galle Gladiators, Jaffna Kings, and Kandy Warriors will compete with each other over the next 3 weeks. The final will be played on the 23rd of December.

Galle Gladiators and Jaffna Kings will take on each other in the inaugural match of the 2nd edition on Sunday. It’s a repeat of the last year’s final where Jaffna Kings won the game by 53 runs to lift the trophy for the 1st time. Galle Gladiators will be led by Bhanuka Rajapaksa in this year and will be looking to make a strong impression from the start.

On the other hand, Jaffna Kings will be eager to start the proceedings with a win and they have got some real potential players with the likes of skipper Thisara Perera, Upul Tharanga, and Maheesh Theekshana.

It’s a balanced surface with equal aid for both batters and bowlers. Spinners will always be handy on this track, having said the seamers can extract bounce if they do bend their back. It’s a 160-170 kind of a wicket and bowling first is a preferable option here.

Bhanuka Rajapaksa is in tremendous form at the moment. He had a great Abu Dhabi T10 league for Chennai Braves. He has mustered 180 runs in 8 innings in the last edition of the LPL at an average of 25.71.

Danushka Gunathilaka was beyond his standards in the last edition. He emerged as the leading run-scorer with 476 runs in 10 matches at an average of 59.5 which comprises 4 half-centuries.

Thisara Perera was simply superb with his all-round performances in the last edition. The all-rounder struck 261 runs and picked up 5 wickets at an economy of 7.63.

Avishka Fernando is a class act and he is the next big thing for Sri Lanka in the future. He was the leading run-scorer for Jaffna Kings in the last edition, he has scored 275 runs in 8 innings at an average of 39.28.

GG vs JK Must Picks for Dream11 Fantasy Cricket: 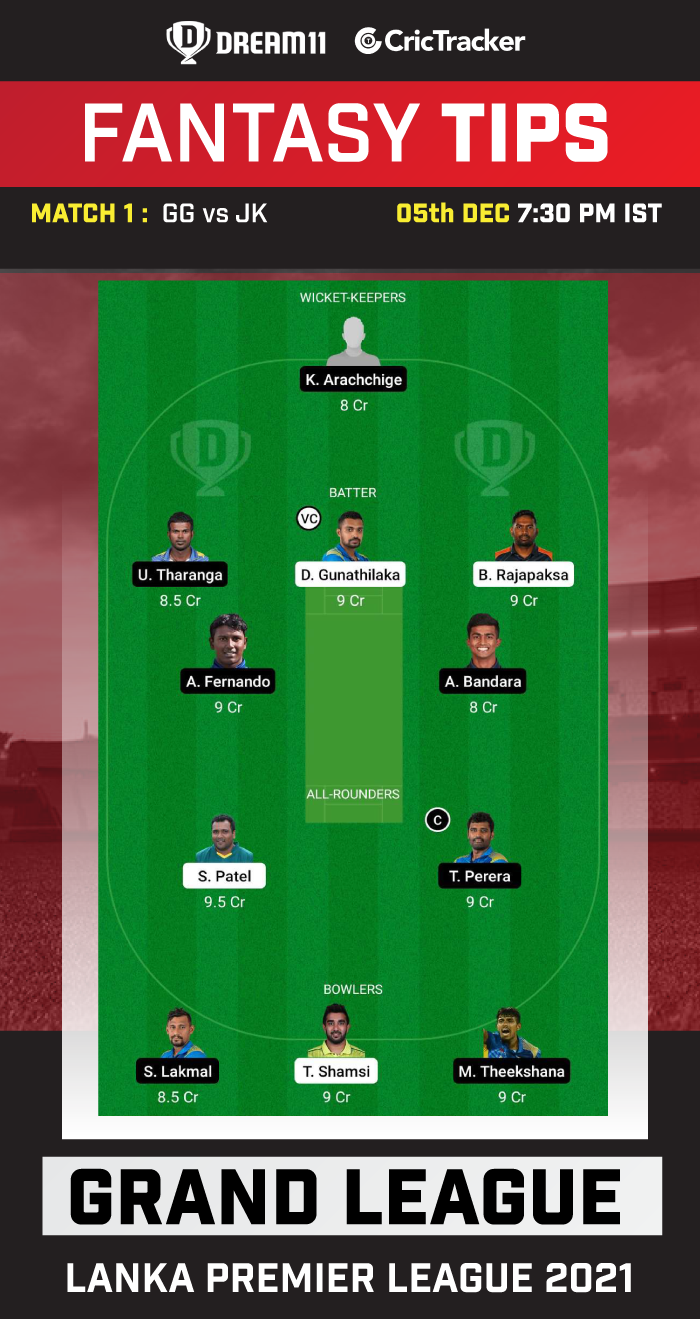 Samit Patel can fetch you points with his all-round skills. He is a risky captaincy option for your Dream11 fantasy teams.

Maheesh Theekshana is a mystery bowler who can cause plenty of damage with his variations. You can take a risk and pick him as your fantasy team skipper.

Considering plenty of options available, you can avoid Mohammad Shamaaz while making your fantasy teams.