The Capitals have won all their matches thus far.

Chennai Super Kings (CSK) have lost back-to-back games in the 2020 edition of the Indian Premier League (IPL) and are slowly, but surely, sliding down the points table. After the Rajasthan Royals (RR) beat them by 16 runs, MS Dhoni and Co lost to the Delhi Capitals (DC) by 44 runs at the Dubai International Cricket Stadium. The Yellow Army is currently placed fifth in the points table.

In the game, they found themselves under the cosh from the very beginning. Shikhar Dhawan and Prithvi Shaw’s 94-run stand for the opening wicket put pressure on them. Though they managed to restrict DC to 175, things never got back in CSK’s control. In the run-chase, barring Avesh Khan, the Super Kings strained against every other bowler, much to their agony.

However, in the end, the required-rate kept climbing and the game went out of their radar when the last three overs started. As far as the Capitals are concerned, they have moved to the top of the points table with four points from two matches. Shreyas Iyer and Co would be relieved that after a nervous start against Kings XI Punjab (KXIP), they put up a clinical show.

Faf du Plessis, the former South Africa skipper, won back the Orange Cap from KXIP’s KL Rahul, who entertained one and all with an unbeaten 132 against the Royal Challengers Bangalore (RCB). Going back to Faf, the right-hander has 173 runs from three games at an average of 86.50 with a strike-rate of 149.13. In the last two matches for CSK, he played knocks that were of no avail.

His fellow countryman Kagiso Rabada has the Purple Cap for the time being. Prior to the game, Mohammed Shami was the highest wicket-taker. Sam Curran also has five wickets to his name, but Rabada has a better economy rate of 6.75 and a strike-rate of 9.6. It goes without saying that Rabada will play a key role of DC have to go on and win their maiden IPL trophy in 13 seasons.

Here’s the updated points table for IPL 2020 and Orange and Purple cap holders: 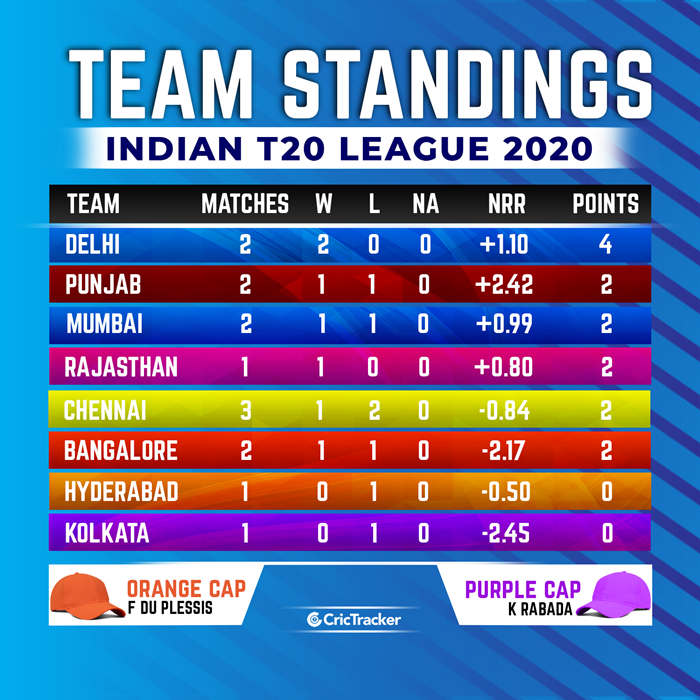