Titans XI are expected to knock Legends XI out of the semi-final race by handing them a defeat.

The 27th match of the Andhra T20 League will be played between Legends XI and Titans XI at Rural Development Trust Stadium, Anantapur.

‘Poles apart’ is how we can describe the two teams who will lock horns at Anantapur on Wednesday. On one hand will be the clinical Titans XI, while we will have a clueless Legends XI on the other. The former have shown great consistency in Andhra T20 League.

Having won 7 out of their 8 matches, they are sitting comfortably at the top of the table. Their semi-final ticket is already booked, while Legends XI still have an outside chance of making it. Having won only 1 game so far, they will need to win both of their remaining games and hope for Chargers XI and Warriors XI to throw their chance away.

Anantapur will be sunny as usual, with no signs of rain. The temperature is expected to rangs between 29 to 32 degrees Celsius.

This pitch will favour the batsman, but the pacers will also get some assistance from the track.

Will there be mega auction ahead of IPL 2021? BCCI President Sourav Ganguly has his say

Legends XI skipper K Karanshinde has not been very prolific as a captain, but he has done a more than decent job with the bat. He has scored 178 runs in 6 innings, with an average of 35.60 and a strike rate of 105.33.

S Tarun has been Titans XI’s best batsman in this competition. He has amassed 227 runs in 8 innings, including a couple of half-centuries.

Shoaib Mohammad Khan has done a great job in both batting and bowling. He has scored 148 runs and has also picked up 5 wickets.

Lalith Mohan is has been one of the most successful bowlers of this tournament, with 15 scalps to his name. He has also maintained a commendable economy rate of under 7 runs per over. 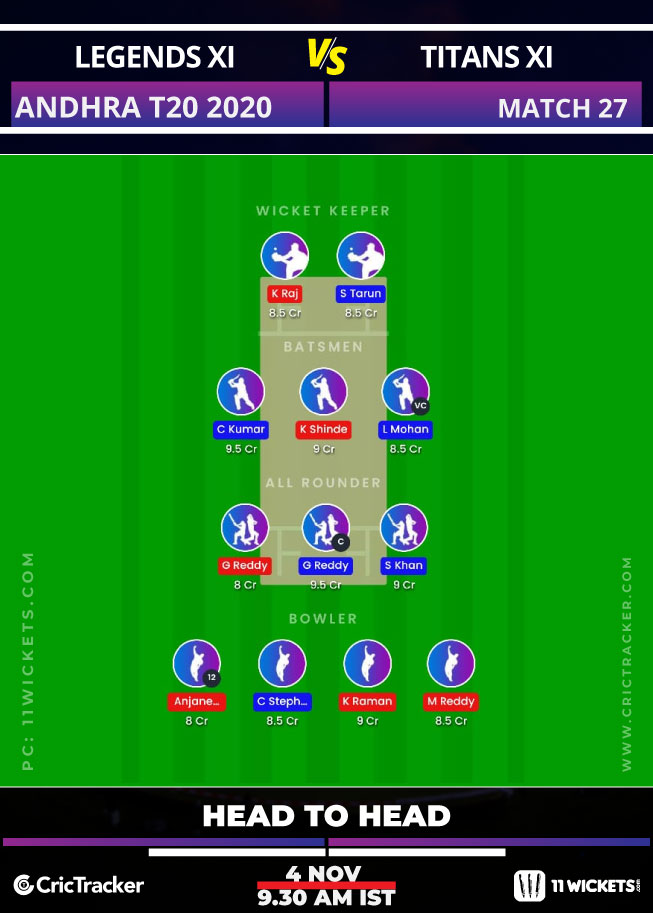 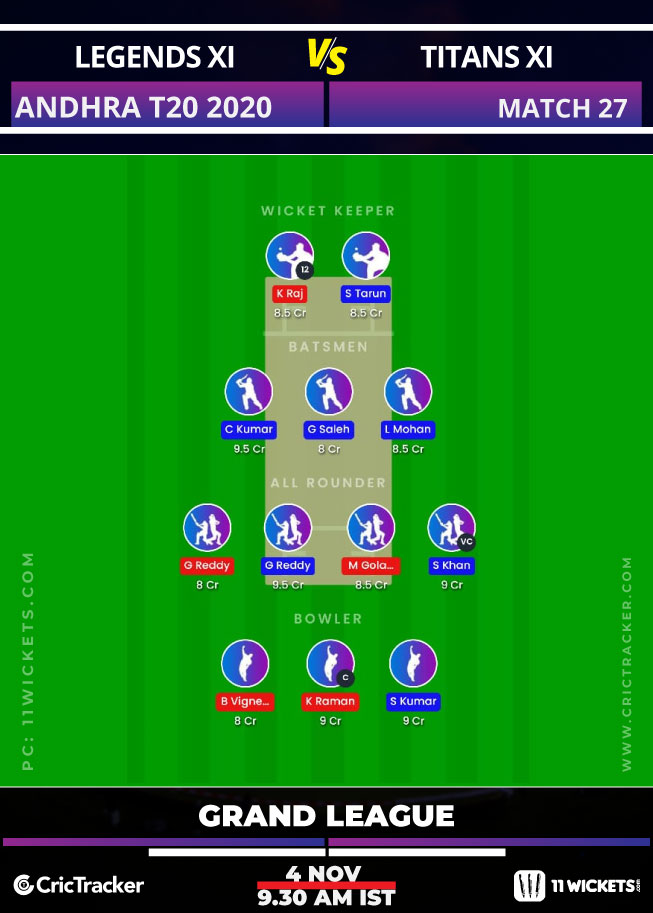 I Karthik Raman is the most crucial player for Legends XI. He has picked 11 wickets at an economy rate of 7.65 runs per over. He also has scored 112 runs in 8 innings, at an average of 22.4 and a strike rate of 155.56. Hence, it will be wise to make him the captain of at least one of your 11Wickets Fantasy teams.

Titans XI are expected to win this match.