Here are all the statistical highlights from Dambulla Viiking’s 28-run victory during the COL vs DAM game. 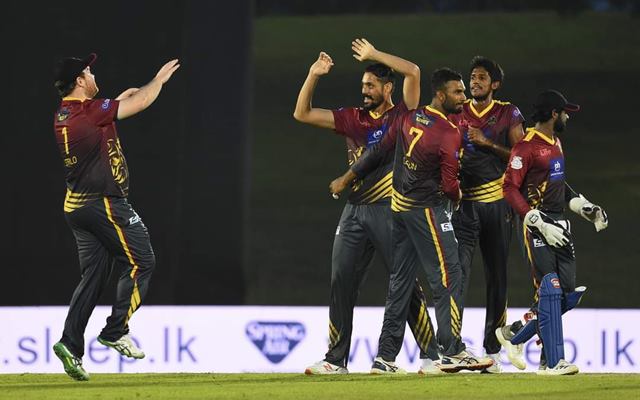 Dambulla Viiking bounced back from a big defeat as they got the better of the Colombo Kings who were unbeaten in the tournament until Monday. Dambulla lost their openers inside two overs and were 82/4 by 11th over. Skipper Dasun Shanaka smashed seven boundaries on his way to a 34-ball 56 to push Viiking to 175/9. No batsman of Colombo Kings got even 20 other than Laurie Evans as they were bundled out to 147 in 18.4 overs. Evans alone scored 59 from 33 balls with nine boundaries.

Here are all the statistical highlights from Dambulla Viiking’s 28-run victory during the COL vs DAM game:

A rare duck for Chandimal in T20s:

A record number of catches:

17 – A total of 17 wickets during COL vs DAM game turned out to be ‘caught’ dismissals; the joint-most number of ‘caught’ wickets during a T20 hosted by Sri Lanka. The 2015 domestic game between Chilaw Marians CC and Bloomfield CAC also witnessed 17 batsmen getting dismissed via ‘caught’.

Only one game in the history of T20 cricket recorded more than 17 batters getting out caught – 18 during the 2017-18 Super Smash T20 match between Northern Districts and Otago.

Russell stars with the ball:

3 – Andre Russell took three catches and picked up three wickets during Dambulla Viiking’s innings but scored only five runs with the bat. Only two players before Russell did this feat on Sri Lankan soil but had not scored a run – Muthumudalige Pushpakumara (4 wickets & 4 catches) for Colts CC against Badureliya SC in 2007 and Malinda Pushpakumara (3 wickets & 3 catches) for SLPACC against Chilaw MCC in 2015.