Sharvin Muniandy has fared decently in this series and can be a safe option as vice-captain.

The 5th and final game of the 5-match T20I series between Malaysia and Vanuatu will be played at the Kinrara Academy Oval in Kuala Lumpur.

This game can be viewed on the YouTube channel of Malaysia Cricket.

Another disappointed was seen for Malaysia at home in space of three weeks where they suffered their 7th defeat in nine matches. This includes four losses against Vanuatu whom they are facing in a 5-match T20I series. Malaysia lost the CWC Challenge match against Vanuatu side by 13 runs despite bundling out the opposition to just 65. They later lost their first two matches of the series.

Malaysia put an end to 6-match losing streak across all formats with a 26-run win on Wednesday in the 3rd T20I. However, Vanuatu registered one more win on Thursday to seal the series with one match still to be played. Malaysia could post 144/7 in their 20 overs with help of an unbeaten fifty from Mohamed Arief. Vanuatu chased down the target with five balls to spare as Joshua Rasu scored a fifty.

The weather is expected to be cleared by the scheduled start of the game. If the rainfall isn’t big in the evening, we might witness an uninterrupted match.

Compared to the 3rd T20I, the track used for the 4th T20I played better. However, due to back to back matches, we might not see pitches being helpful to the batsmen. Maximum scores of 150 are expected on the final day of the T20I series.

Nalin Nipiko continues to dominate the fantasy league as he took is quite consistent in the T20I format as he scored two 40+ scores on Wednesday and took four wickets across the two matches. Patrick Matautaava scored a brilliant ton in the morning game and will be hoping to replicate the same success with the bat. The consistency of Sharvin Muniandy and Syed Aziz with the bat will script Malaysia’s success. Joshua Rasu couldn’t score big runs in the two games after his 54-ball 74 in the first match. Skipper Andrew Mansale bagged two ducks in two games but took four wickets.

Sharvin Muniandy has fared decently in this series and can be a safe option as vice-captain. 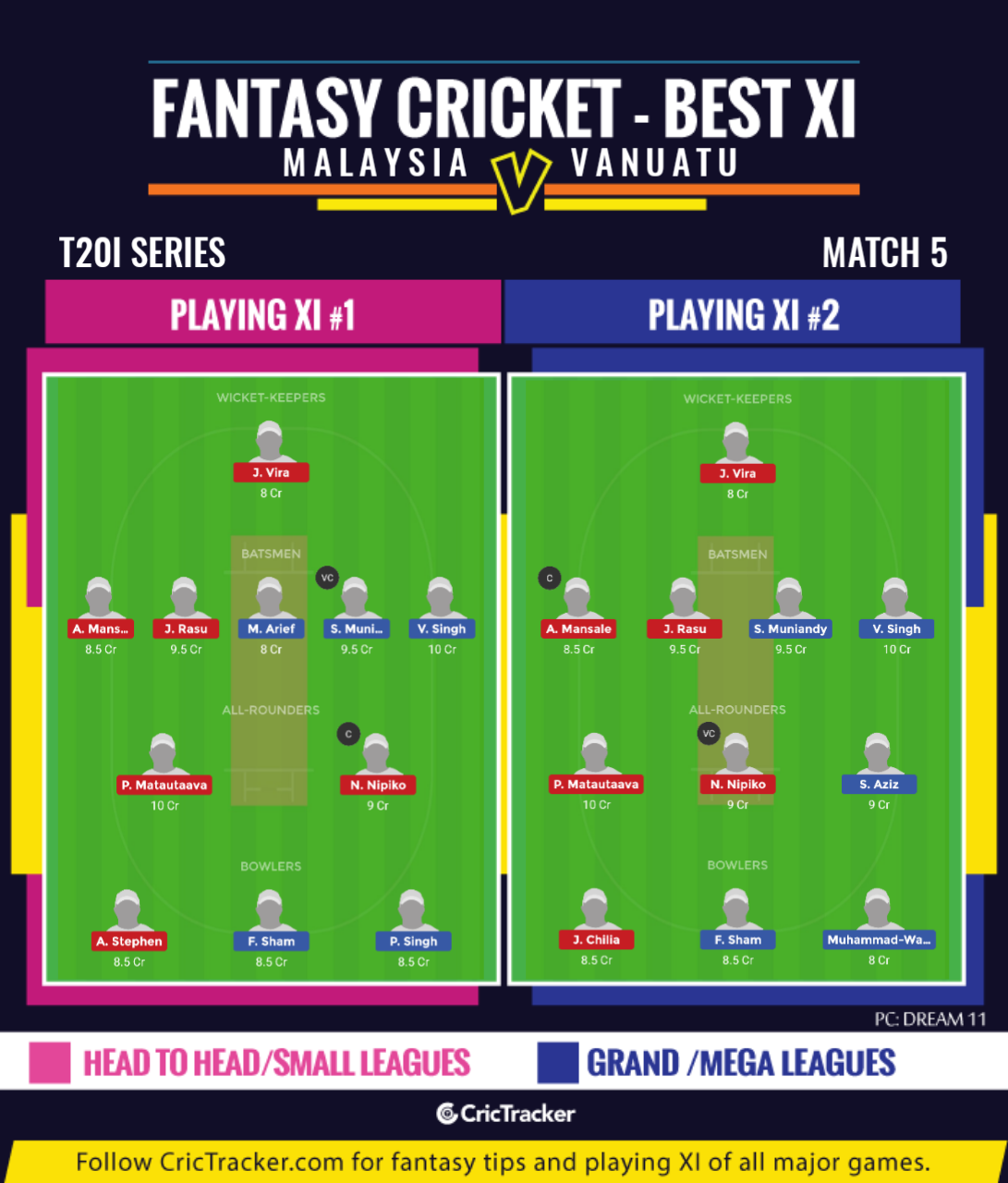 Both the teams are unlikely to make any changes to their playing XIs that have played on Thursday. Both teams took the field with XIs that can be said as the best among their respective squads.

Malaysia is likely to get a consolation win.