Victoria has confirmed that they will play at least one debutant in the XI for this game. Keep an eye on the playing XIs after the toss.

The 20th match of the Marsh One-Day Cup 2019 will be played between Victoria and South Australia at the Melbourne Cricket Ground in Melbourne.

Both the sides have been very much inconsistent this season winning three in six matches. South Australia just managed to stay in the hunt until the Monday’s game thanks to their bonus-point victories. With the match set to be played at the MCG, both the sides will be aiming to make it a memorable one for them and signoff from the competition as the third-placed side.

The conditions will be cloudy to start with in the morning in Melbourne. However, the sun is expected to come out by 2-3 PM. There is no chance of rain as well according to AccuWeather, which should pave the way for an exciting game of cricket. The temperature will hover around 17-20 Degrees Celsius during the match.

Only a solitary One-Day match has been played at the venue in this season and Victoria managed to win the thrilling game of cricket. The score around 260-270 should turn out to be a par score yet again. The team winning the toss is expected to bat first again.

Jonathan Merlo and Mitchell Perry have been included in Victoria’s 12-man squad for this match. Travis Dean and Andrew Fekete have been dropped.

Joe Mennie has been added to South Australia’s 13-man squad for this match.

Aaron Finch is likely to get going after a failure in the previous match. He, Matthew Short and Handscomb can be the top picks for this match in your Dream11 Fantasy side. Ferguson and Carey are crucial from South Australia team. Siddle, Richardson, Wes Agar and Mennie should be the bowlers you should look to pick. 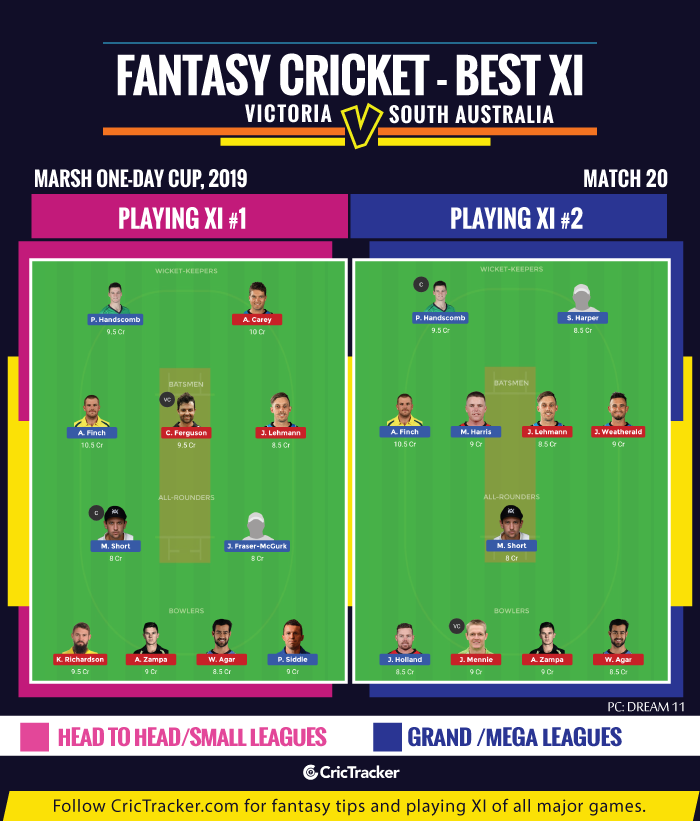 Victoria has confirmed that they will definitely play one of Merlo or Perry in the XI. Both of them also have a chance to make their List-A debut. Keep an eye on the XIs after the toss.

Jonathan Merlo and Mitchell Perry are yet to be included in Dream11 Fantasy players list. If they are included later, one of them can be picked in grand leagues if playing.

Victoria are expected to win the match.