Here's the Fantasy XI for the game between SRH and RCB.

This CrickingDuels Fantasy guide is for the match 39 of the ongoing Indian Premier League (IPL) season which will be played between Sunrisers Hyderabad (SRH) and Royal Challengers Bangalore (RCB). Well, things are not at all conducive for Virat Kohli and his means they have to win all the remaining matches now to qualify for the playoffs. But it will not be easy for them as they are facing Hyderabad who are absolutely unbeatable at home ground and are riding high on confidence after chasing 165 against Delhi.

The pitch at Rajiv Gandhi International Stadium is on the slower side and the long boundaries will make it an interesting encounter. RCB will have to adapt to the conditions soon enough and make every game count now. While Kane Williamson would feel that they will just have to continue in the same vein to seal their place in the playoffs. Here we bring to you the CrickingDuels Fantasy guide for the game:

The simplest choice so far for me in this department. Kane Williamson, Virat Kohli and AB de Villiers are the must in any fantasy side in the world. The trio eats up a lot of credits but surely will give me points on any day. The fourth batsman in the team would be either Alex Hales, Shikhar Dhawan, Manish Pandey or even Mandeep Singh. It is up to you as there are so many options. I will go with Hales who will be impactful in the powerplay overs upfront.

Again, I have to pick two all-rounders compulsory and it is better off going with tried and tested players. Shakib Al Hasan will surely bowl four overs on a slow pitch and he is economical more often than not. Yusuf Pathan will be another all-rounder in my team who is high on confidence and is available for fewer credits which helps me going forward. One can go for Colin de Grandomme as well who has been bowling well in the middle overs for RCB.

Again, it is a simple option here to have the wicketkeeper who bats at the top of the order. Parthiv Patel batted well in his first game of the season and scored a half-century and should continue playing in this game as well. Wriddhiman Saha is a waste in fantasy at the moment who bats lower down the order and hardly gets any balls to plays and he is only a good option if he is opening the innings.

Rashid Khan, the Man of the Match in the last game, has to be there without a doubt. His definitely has the capability of picking at least a couple of wickets. Siddarth Kaul has been another young player who has stepped for SRH at the right time. He has emerged as the death bowler for them beautifully and gets wickets at the backend of the innings. Tim Southee’s batting impressed me the most in the last match and his bowling is world class as usual. Umesh Yadav is in the form of his life and can pick wickets in a hurry if he gets on a roll. 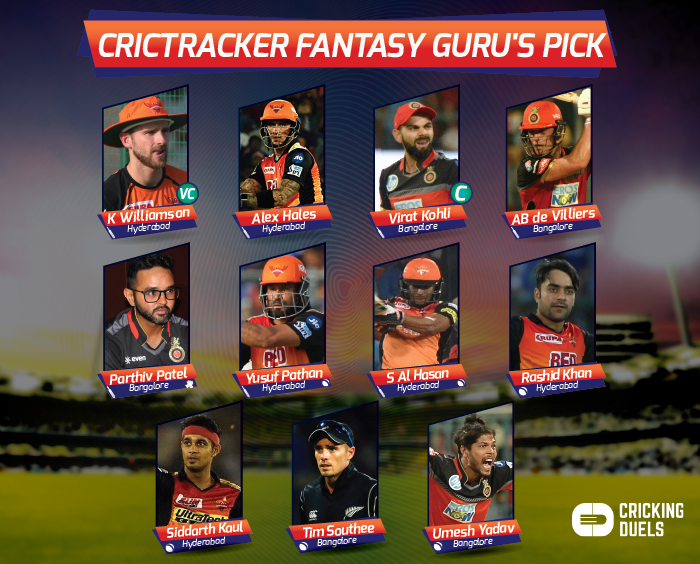