The League will determine the qualification for the 2023 ICC ODI World Cup. 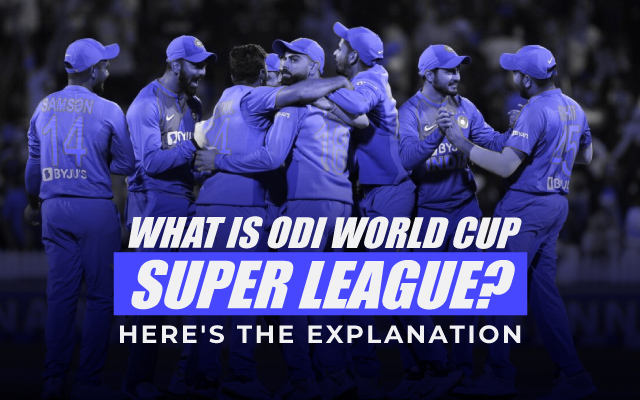 The International Cricket Council (ICC) has launched the ODI Super League as a qualification pathway for the 2023 World Cup scheduled in India. The League, a long-time deliberation of the ICC, was to be unveiled earlier this year, however, numerous delays due to the COVID-19 pandemic deferred its launch until Monday (27th July 2020).

What was the need for such a league?

The Super League aims to provide relevance and context to men’s ODI cricket between two ICC World Cups, a quadrennial event. The League endorses the view of parity: that every limited-overs game must hold equal importance. By the virtue of this league, a match involving lower-ranked teams will have just as much importance as those involving the big guns. Further, it contextualises ODI cricket as every match will impact the other teams involved as a part of the League.

Who are the participants and when will the League start?

The event will feature 13 teams- the 12 ICC Full Members and Netherlands. The inaugural edition of the tournament kicks off with England taking on Ireland for a 3-match ODI series from 30th July 2020.

Why the Netherlands as the 13th team?

The 13th spot of the Super League was decided by the World Cricket League Championship that the Netherlands won.

How will the League be played?

Each team will play a 3-match ODI series against eight of the twelve other competing nations. A total of eight such series will be played, of which four will be played at home and the remaining away. Hence, a team will play 24 matches in toto during the entire league against different oppositions and venues. At the conclusion of the series, India and the top seven teams will qualify for the 2023 ODI World Cup.

India and the top seven teams…? Is there any privilege for India?

Yes. India has an automatic qualification by the virtue of being the hosts for the 2023 World Cup. Therefore, the eight teams (top seven teams plus India) will qualify through the League.

Each team will earn ten points for a win, five for a tie/no result/abandonment, and none for a loss. The ranking will then be determined according to the total points earned by all the teams across the eight series each team will play.

If the top seven along with India qualify for the World Cup, are the ambitions of the remaining teams over?

Not quite. The teams finishing as the bottom five will participate in the ICC ODI World Cup Qualifiers 2023 along with five Associate teams, which will eventually decide the final and remaining two entrants to the ten-team World Cup 2023.

No. Much like the ICC World Test Championship, the teams won’t face all the participating opponents.

Does that mean a team might win the league without facing the teams that finish second, third, and even fourth on the points table!?

Yes. Such a situation may very well arise. However, the ICC is aware of it and stated that the match-ups will be devised according to the ICC ODI rankings to evade any possible disparity.

So all the ODIs henceforth will be a part of the World Cup Super League?

No. There will still be some independent ODI series that won’t form a part of the League. For instance, only the first 3 matches of the 5-match series of Sri Lanka and Australia in June 2022, will be counted for the League.