On head-to-head count, KKR have won a mere 23.08 percent of their games against MI.

Mumbai Indians (MI) have been on a rampage in the 2020 edition of the Indian Premier League (IPL). Having won five out of their seven matches, Rohit Sharma and Co are currently sitting pretty in the top half of the points table.

After beating the Delhi Capitals (DC), MI are now set to lock horns with the Kolkata Knight Riders (KKR), led by Dinesh Karthik, on Friday at the Sheikh Zayed Stadium. MI are aware of the conditions in Abu Dhabi, winning quite a significant number of matches at the venue.

Also, they thumped the Knights at the same venue around three weeks ago. KKR, on the other hand, were jolted in their last game after Royal Challengers Bangalore (RCB) beat them by 82 runs in Sharjah. On head-to-head count, the Knights have won 23 percent of their games against MI.

The pitch in Abu Dhabi has been fairly good for batting and it’s a venue where teams, batting second have won the most times in this tournament, four times. But still, a target above the 170-mark can put pressure on the chasing teams.

The temperature will be around the 31 degrees Celsius mark with the humidity in the high-30s. The dew factor may not overly come to the fore.

Playing Combinations for MI vs KKR

Rohit Sharma has outstanding numbers against the Knight Riders. In 26 matches, the right-handed batsman has 904 runs at an average and strike-rate of 47.58 and 134.93 respectively. He has six half-centuries and one ton with a top score of 109.

Even in their last meeting in Abu Dhabi itself, the 33-year-old turned up with a match-winning knock. The Knights need to see his back at the earliest.

Eoin Morgan doesn’t have overly outstanding numbers against the Mumbai-based franchise, but he has been in good form in the ongoing IPL. England’s limited-overs captain has also played a couple of match-winning knocks for his franchise.

Though he has had a couple of failures of late, he is expected to come back strong. In his previous outing against MI, the southpaw couldn’t score big and would want to make amends.

MI vs KKR Head to Head 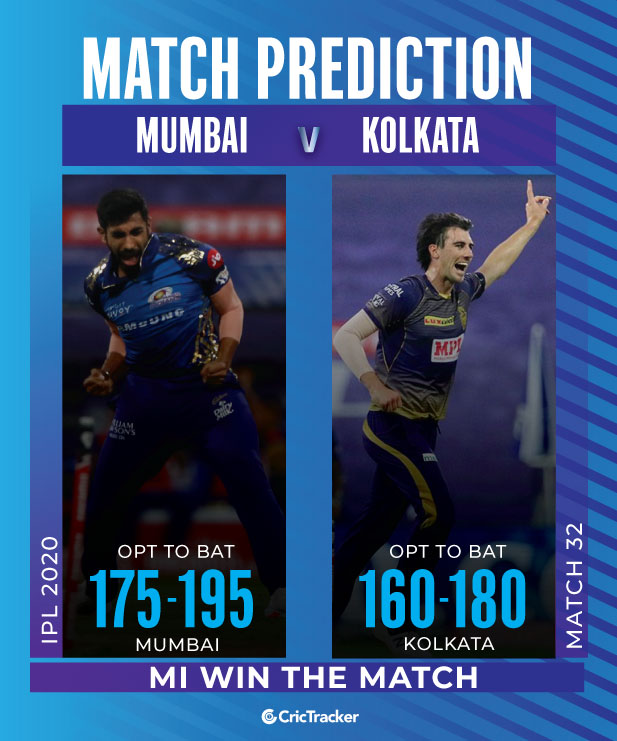