Hampshire went on to win the game by an innings and 105 runs. 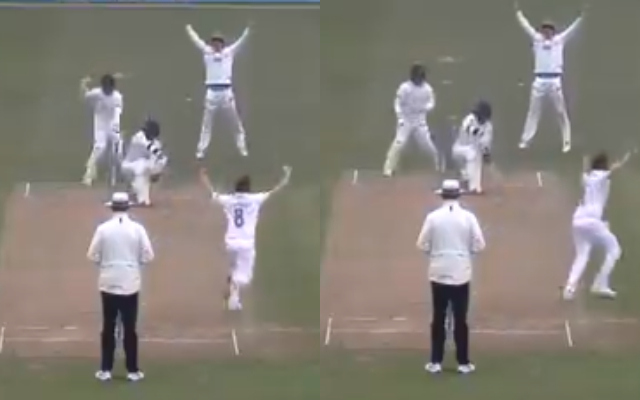 The County Championship match between Hampshire and Leicestershire in England was marred by a controversial stumping. Batting first, Hampshire registered a mammoth first innings total of 612 for 5 before declaring. Their captain James Vince starred with the bat, scoring 231 off just 220 balls. His knock was laced with 36 fours and a couple of sixes.

Tom Alsop (119) and Liam Dawson (152) also scored centuries as Hampshire posted the huge total. In reply, Leicestershire came up with a poor batting display. Barring Harry Swindells (59), no other player managed to put up any resistance as Leicestershire could not avoid the follow-on. They were all out for just 202 and Vince did not hesitate in enforcing the follow-on.

For Hampshire, Kyle Abbott and Mason Crane picked up three wickets each. Following-on, Leicestershire were off to a poor start as Samuel Evans departed for just eight. Hassan Azad and Harry Dearden then steadied the innings and took the score past the 50-run mark when the controversy took place.

Leicestershire were on 59 for 1 in the 25th over when Dawson was bowling to Azad. On the fourth ball of the over, he beat the outside edge of Azad’s bat with a well-flighted delivery, and wicketkeeper Lewis McManus dislodged the bails. The square leg umpire gave Azad out stumped and the batsman had no option but to walk off as Hampshire celebrated their second breakthrough.

Michael Vaughan opines on the controversy

According to Law 29.1.1.5: “The wicket is put down if a bail is completely removed from the top of the stumps … by a fielder with his/her hand or arm, providing that the ball is held in the hand or hands so used, or in the hand of the arm so used.”

The umpire clearly made a mistake with his decision and surprisingly, McManus did not even try to  withdraw his appeal or notify the umpires of his error. And unsurprisingly, he is facing criticism from several quarters for his antics. Former England skipper Michael Vaughan has also expressed his surprise over the incident.

He took to Twitter and described the act as “very poor”. Vaughan also hoped that this would serve as lesson to the wicketkeeper as there is no chance of getting away with such incidents these days. He wrote, “Very poor this but I hope it’s a lesson to him… All county games are now streamed so you can’t get away with anything.”

Very poor this but I hope it’s a lesson to him … All county games are now streamed so you can’t get away with anything … https://t.co/imXxtvKTKu