Andile Phehlukwayo's recent performances make him a main pick as captain or vice-captain.

Dolphins and Warriors made an impressive start to their respective campaigns of the Momentum One-Day Cup 2019 as they are undefeated after playing three games. Dolphins, boosted by the likes of Miller, Phehlukwayo and Tahir won each of the three matches while defending big scores. They will be now up against Warriors who won two games while the match in J’Burg against Lions ended in a washout.

It was Andile Phehlukwayo’s all-round performances that helped Dolphins in their previous two games. Phehlukwayo scored 69 against the Titans while in the game against Cape Cobras, he bagged a 4-wicket haul after scoring 67. Andile has a total of 162 performance points to his name as he recorded 92.5, 45 and 24.5 points respectively in the three games thus far.

The 11th match of the Momentum One Day Cup 2019 will be played between Dolphins and Warriors at the Kingsmead in Durban.

The game will be live on SuperSport in South Africa.

Four of the last five completed MODC matches at the Kingsmead witnessed the batting first sides posting less than 210 and losing the game. Another game turned out to be a high-scoring one as the chasing side lost by 26 runs in the pursuit of a 316-run target.

Andrew Birch, Anrich Nortje and Lutho Sipamla – The pace trio of Warriors are known for their ability to break through any batting line-up. However, picking anyone or two players among the three won’t be easy as the wickets are usually shared between them.

Andile Phehlukwayo’s recent performances make him a main pick as captain or vice-captain. 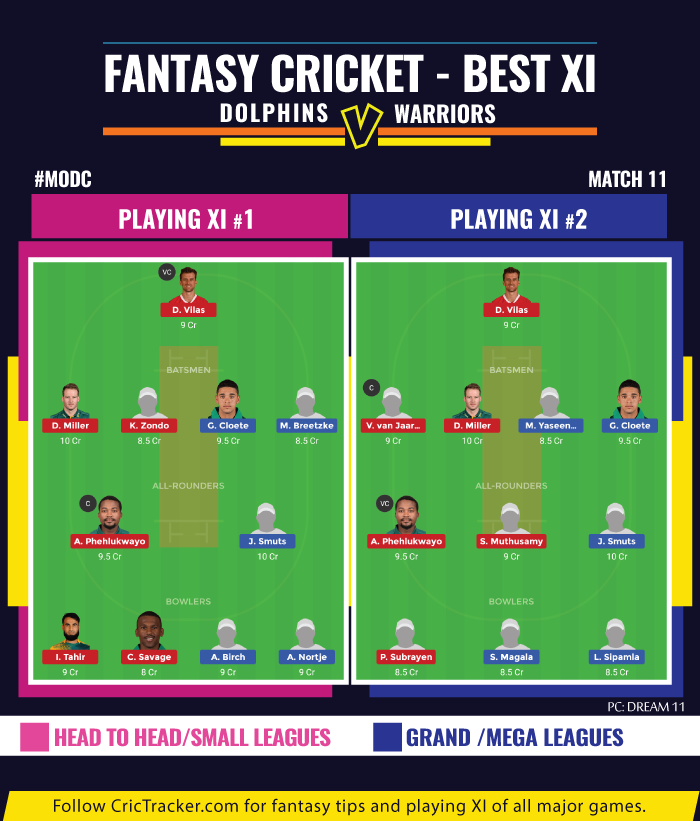 Both the teams are expected to be unchanged from the last match. This game will be last for both the sides ahead of South Africa’s home ODI series against Sri Lanka. All the players who are part of the ODI series will be playing this fixture.

The Dolphins are expected to register their 4th straight win of the tournament by defeating the Warriors.