Rassie van der Dussen has a batting average of 42.31 for the Lions in List A cricket.

The 1st match of the Momentum One-Day Cup 2020 will be played between Titans and Lions at the SuperSport Park in Centurion.

The Momentum One-Day Cup 2020 will kick start on Friday with the Titans hosting the Lions at the SuperSport Park in Centurion. This day/night fixture is expected to include the likes of Lungi Ngidi, Tabraiz Shamsi, Reeza Hendricks, Beuran Hendricks, Rassie van der Dussen and Bjorn Fortuin who are going to be part of South Africa’s ODI squad against England.

Titans are the defending champions as the topped the points tally in the 2019 edition and registered comfortable wins in the knockouts. The Lions, on the other hand, finished last in the league phase where they won only two of the ten matches. However, four of the remaining eight matches ended without a result and pushed the Lions to the bottom of the table.

The Centurion’s SuperSport witnessed Isolated Thunderstorms on Thursday night. Same might be expected on Friday which could interrupt the last 15-20 overs of the match.

The SuperSport Park hosted five Momentum One-Day Cup matches in the 2018/19 season out of which two witnessed 300+ totals while two other with totals below 200 by the team batting first. In other words, the track here was either too tough for the batters or a batting paradise. Hence, the team batting first will have the advantage if they manage to read the track and adapt quickly. The current season matches do suggest the tournament opener witness a 275+ chase in Centurion.

Dwaine Pretorius has been a key all-rounder for his team over the last three season. He scored nearly 600 runs with three fifties and a hundred across 18 matches in this period and also picked up 13 wickets. Rassie van der Dussen’s solid batting numbers in List A cricket fetched him a spot in the South African side. He has been going through good for in all formats and is likely to score a big one on Friday. Theunis de Bruyn has smashed 530 runs across his last nine MODC matches with help of two hundreds and a couple of half-centuries. Tony de Zorzi somewhat recorded similar numbers with the bat as he scored 664 runs in his last 13 MODC games with two tons and three fifties. Dominic Hendricks was the top batter for the Lions in the previous edition with two centuries and a fifty across five matches. 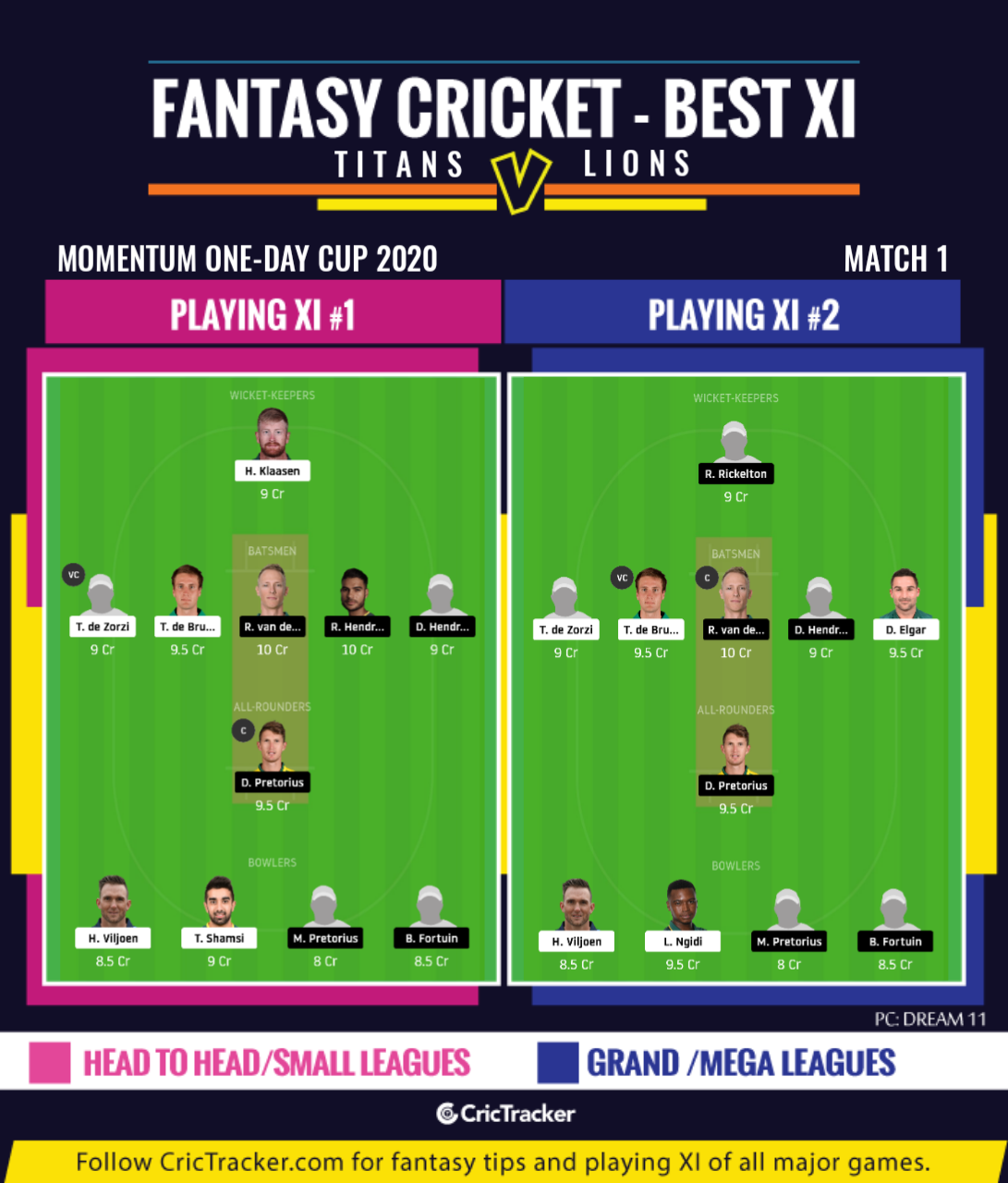 The Lions don’t usually announce the squad a day before the match like other teams. Since Titans named Lungi Ngidi and Tabraiz Shamsi in their squad for this game who are already part of the ODI squad against England, we can expect Lions to take the field with Bjorn Fortuin, Reeza Hendricks, Beuran Hendricks and Rassie van der Dussen on Friday. All these six players can travel and join the South African squad after this game as the start of the ODI series is four days away.

The Lions should earn a comfortable win if all the key players are available for this opening match.