The veteran talked about his career and also had some opinions about Indian cricket and its players. 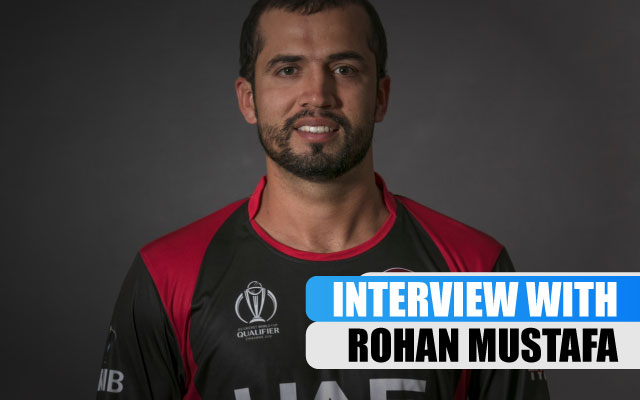 Rohan Mustafa has been one of the most prominent figures in UAE cricket over the last seven years or so. At the age of 10, he moved with his family to Sharjah from Kohat, Pakistan. When he was 15, Rohan lost his father, who was also a mentor. However, he continued playing cricket and made his way into the UAE U19 team back in 2007 and from there on, he hasn’t looked back by any means.

In 2014, Mustafa made his ODI and T20I debut against Scotland and Netherlands respectively. In the same year, he had found himself in trouble after a Dubai court handed him a ban for allegedly “absconding from duty”. However, later he was able to overturn the order after appealing. The now 32-year-old Rohan made his comeback to the UAE national in the 2015 edition of the World Cup.

In ODI cricket, Rohan has scored 761 runs and picked up 43 wickets from 39 matches. In T20 cricket, the all-rounder has notched 766 runs and racked up 45 scalps. He also has one century, five half-centuries and one five-wicket haul to show for his efforts. In fact, in T20Is, Mustafa is the leading wicket-taker for the UAE. Needless to say, that he’s a fulcrum of his nation at the highest level.

In the meantime, Rohan took time out of his busy schedule and featured on CricTracker’s Question-and-Answer session, ‘Free Hit’. During the chat, the veteran talked about his career and also had some opinions about Indian cricket and its players. He didn’t forget to add humour into the conversation as well.

Here are the excerpts from Rohan Mustafa’s interview:

What’s the best moment in your career so far?

It was against Papua New Guinea when I picked up a five-wicket haul and scored a century.

Two words to describe your shirtless moment in T10?

It was funny, but for me, it was embarrassing.

Why would you say it was funny?

For everyone it was funny, but for me, it was embarrassing.

What is your favourite cuisine?

Bungee jumping or skydiving- What would you prefer?

Which vegetable do you hate?

I will go with ladyfinger.

What’s the one thing you would like to steal from a cricketer?

A bat from Virat Kohli.

What’s the one record you would like to achieve?

What’s the last item you purchased?

Which IPL team suits your style of play?

Night-in or night-out- What do you prefer?

What angers you the most?

Who’s the laziest cricketer in the UAE team?

Double your weight or half your height?

What’s the dressing secret from the UAE team that no one knows?

When we won against the Netherlands, a few team members were dancing and it was quite funny.