Spartans haven't played since December 3 as their last two matches got washed out.

The second edition of the Mzansi Super League (MSL) has reached close to its climax. Paarl Rocks have qualified for the final and are awaiting for their opposition which will be decided via an eliminator. Nelson Mandela Bay Giants and Tshwane Spartans will face-off to seal the second finalist spot. The Giants have been consistent throughout the season but missed a direct qualification to the fina; by a whisker losing to the Rocks.

The Spartans, on the other hand, won fewer matches compared to Cape Town Blitz but still ended up at the third position. 5 washed out matches and three thumping wins, one of them coming with a bonus win, helped them go ahead. Luck was with them throughout it seems as the last league game between Jozi Stars and Durban Heat also got washed out. It crashed the hopes of the Heat going through to the knockout game.

As far as the current form is concerned, both the teams are fairly struggling. The Spartans haven’t won in the last four matches. Their last two encounters were washed out and the team had lost two games prior to it. The Giants too have won only a couple in their last five matches. It will be interesting to see who comes out on top to qualify for the final. If rain plays spoilsport again, the match will go into the reserve day, unlike the last season.

The forecast is for a clear day in Port Elizabeth on Friday with no chances of rain whatsoever. Though it is expected to get cloudy around 8 PM, the heavens are not expected to open up. The temperature will hover around 22-24 Degrees Celsius during the match. As far as the pitch is concerned, it has been a belter for batting so far this season with the scores hovering over and around 160-170 consistently.

The Giants lost their previous game to the Rocks and might ponder over bringing in Junior Dala for Mthiwekhaya Nabe. Nabe bowled only a couple of overs and went for 21 runs and Dala might be able to sustain the pressure of the knockout game. Roy’s injury has also hurt the team at the top and Breetzke will be expected to get going from the word go.

Kuhn, Smuts and Dunk have been brilliant for them while Marco Marais has been the find for them with the bat. Morris, Burger and Imran Tahir have looked after the bowling attack and will have to play their best cricket on Friday to go past the Spartans.

Tshwane Spartans have not taken the field since December 3 when they lost to the same team at the same venue, St George’s Park. However, they are not expected to make any changes to their line-up with Mulder doing well opening the innings. Dean Elgar hasn’t clicked like he wanted to and might continue to warm the bench as well. However, with AB de Villiers and Petrus van Biljon in full flow, the Spartans will bank on the duo to come good in the crunch game. 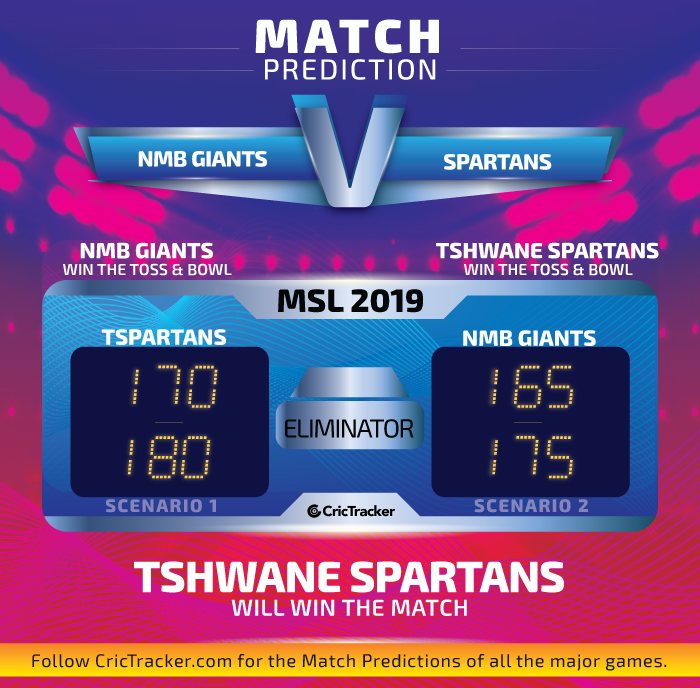