Paarl Rocks have delivered consistent performances throughout the season.

As MSL 2019 has reached its pinnacle, two pals Faf du Plessis and AB de Villiers will battle it out in the final of the tournament. Paarl Rocks and Tshwane Spartans will lock horns in the final of the MSL 2019 at Boland Park on Sunday. Both the teams rather had an unlike journey to book their berth in the finals.

Paarl Rocks have delivered consistent performances throughout the season. The Faf du Plessis-led side topped the points table after registering six wins from their ten matches and amassing 27 points. Cameron Delport and James have been two rock-solid pillars of their batting force.

Tabraiz Shamsi, who has scalped 14 wickets so far in the tournament, has been their top-performing bowler. Bjorn Fortuin has also garnered much attention this season after picking up eight wickets this season. Considering their excellent form in the MSL 2019, Rocks will be favourites to clinch the title this season. However, they have suffered defeats in the past four encounters against Tshwane Spartans, something that Rocks would be hoping to change.

Tshwane Spartans, on the other hand, have been a tad lucky with five of their matches getting washed out due to rain.  Spartans have gathered 23 points in the tournament by winning three matches out of ten. However, individual performances from AB de Villiers, Dean Elgar and Morne Morkel cannot be overlooked.

Skipper AB de Villiers has led his side from the front by delivering several match-winning performances. Regarded as one of the best batsmen to embrace the limited-overs format, the right-hander has gathered 274 runs in eight matches in Spartans’ campaign. Morkel has been the pick of the bowlers as the pacer has scalped 12 wickets so far in the tournament.

There are no chances of rain whatsoever. The temperature is expected to hover around 19 degrees Celcius with moderate levels of humidity, according to AccuWeather. The chasing sides on this track have found it relatively comfortable to bat second no matter what the target has been. The dew factor has played a significant role here and perhaps will be a great advantage for the side batting second.

Rocks will be relying on their strong batting force comprising the likes of Faf du Plessis, James Vince and Cameron Delport. All eyes will be on Tabraiz Shamsi, who has picked up 14 wickets in Rocks’ successful MSL 2019 campaign. He will be assisted by Bjorn Fortuin and Isuru Udana. Udana’s contribution will prove vital as the all-rounder has delivered match-winning performances in both the departments.

Spartans will be relying on the duo of Morne Morkel and Lungi Ngidi to provide the early breakthroughs with the new ball. Both the pacers, who have ample experience under their belt, have scalped 12 and 9 wickets respectively. Skipper AB de Villiers, who has scored 274 runs in eight matches at an impressive average of 45.66, will be steering their batting attack along with Dean Elgar. Elgar has gathered 194 runs from seven matches at an average of 38.80.

The prediction is for Paarl Rocks to win the match 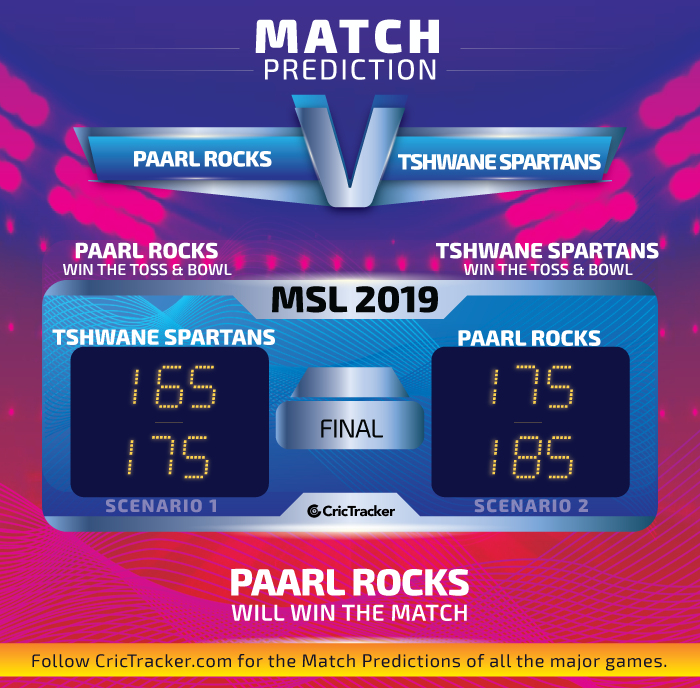