Chris Gayle will face Dale Steyn and Anrich Nortje first up and might get out early.

The 1st match of the Mzansi Super League (MSL) 2019 will be played between Jozi Stars and Cape Town Blitz at The Wanderers Stadium in Johannesburg.

The finalists of the last season, Jozi Stars and Cape Town Blitz, will face-off in the first match of the second edition of the MSL. Jozi Stars led by Dane Vilas emerged triumphant in the inaugural season as they successfully chased down 114 easily. This time around, they have appointed Temba Bavuma as the skipper with Vilas being released and will be looking to defend the title. The team is a perfect blend of youth and experience and looks a formidable side going into the competition.

The Cape Town Blitz, on the other hand, missed out on the chance to be crowned as the champions last year. They have now got a chance to avenge for that defeat and start the tournament on a winning note. They released the skipper Farhaan Behardien and Quinton de Kock will take over the leadership of the team. With Dale Steyn also marking his comeback on the field since the IPL, expect things to get heated in the season opener.

After starting the day on a bright note, the dark clouds are expected to hover over the Wanderers. There is also a slight chance of the rain coming down which might delay the start or interrupt the game. The temperature is expected to hover around 25-28 Degrees Celsius according to AccuWeather.

The ball travels at the Bull Ring and the matches played earlier this year at the venue were high-scoring. It is extremely tough to defend at this venue and expect the team winning the toss to bowl first. The surface is expected to be a belter to bat.

Wahab Riaz isn’t available for the first two matches as he is currently in Australia to play the T20I series. Moeen Ali has joined Cape Town Blitz to replace him for two games.

Asif Ali is not available for Cape Town Blitz as he is also in Australia playing in the ongoing T20I series.

Quinton de Kock and Liam Livingstone could be dangerous at the top of the order and they should be picked in your Dream11 Fantasy. Moeen Ali could also be an interesting pick given his all-round skills. Dale Steyn is making a comeback and even he is likely to pick a few wickets.

Reeza Hendricks and Rassie van der Dussen are two exceptional batters for the Jozi Stars. Kagiso Rabada should also be picked. Daniel Christian bowls at the death mostly and can finish well with the bat too. 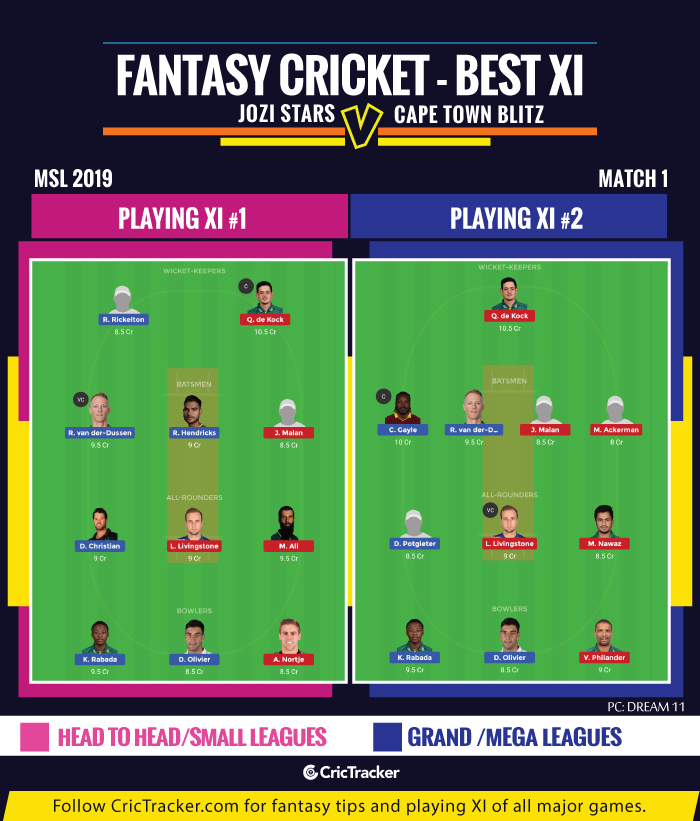 Chris Gayle will face Dale Steyn and Anrich Nortje first up and might get out early which is why we haven’t picked him in out Team 1. On the flip side, you can also make him the captain of your Dream11 Fantasy side in Grand League.

Delano Potgieter’s stats as an all-rounder are too good and if he gets a chance in the playing XI, could be picked in the team.

This being the first match of the season, wait for the playing XIs to be announced.

Jozi Stars are expected to win this match.