It's a clash between the table-toppers.

The Cape Town Blitz regained their position back at the top of the points table in the Mzansi Super League (MSL). The same was after their 10-run victory over the Durban Heat at the Kingsmead. Their other two victories have come against Jozi Stars, the cellar dwellers. However, Quinton de Kock and Co’s next challenge won’t be easy as it’s against Nelson Mandela Bay Giants, captained by JJ Smuts.

The game will be played at the St George’s Park in Port Elizabeth on Wednesday, November 20. At the same venue, the Giants took down Temba Bavuma’s Jozi Stars by 24 runs. Their bowling hasn’t allowed the opposition batting to race away. But it’s likely to be put to test against a power-packed Blitz batting. Interestingly, like the Blitz, even the Giants have won both their games versus the Stars.

In the only game played at the venue thus far, the batting team had to strain for most part. The track got slower as the match progressed. Hence, batting first should be the way forward for both the sides. The powerplay will be crucial from both team’s perspective. The conditions will be on the cloudy side, but with no chance of rain. The temperature will be around the 17 degrees Celsius mark.

Ben Dunk is the leading run-scorer for the Giants with 64 runs, but the rest of the lineup has also chipped in from time to time. Talking about their stronger aspect- their bowling- Chris Morris, Smuts and Imran Tahir has a combined tally of 10 wickets with economy rates under six. Junior Dala is their leading wicket-taker with six scalps. Burger has also rattled the batters with his pace variations.

Janneman Malan and Quinton de Kock will be key components. Both the openers have in excess of 100 runs and need to contribute heavily. Liam Livingstone has 116 runs at a strike-rate of 150.64. Asif Ali is also finding his rhythm in the middle order. Dale Steyn and Sisanda Magala have six wickets each. They have gotten apt support from the likes of spinner George Linde and pacer Anrich Nortje. 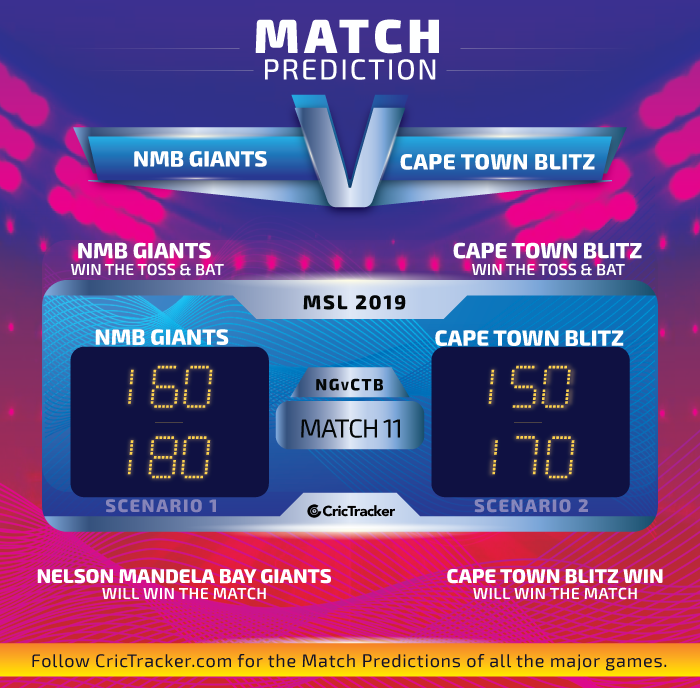