Some thunderstorms and showers are predicted in Centurion ahead of this all-important clash for both sides.

Both these sides played a thrilling encounter when they met each other in the reverse fixture, with the Cape Town Blitz trumping the Spartans by 15 runs. Only time will tell how crucial that result could be, but one thing is certain that Cape Town winning that game hampered the Spartans’ chance of direct qualification.

Centurion has had a lot of weather issues in recent times and it is not certain if we will see a full game. The hosts will definitely not mind the game not getting completed, courtesy the 4-point lead they have. But if the game does get abandoned and they finish with 23 points, the third qualification spot will be open for Durban who will play their final game on Monday.

Dale Steyn has been the storm-bringer no matter where he goes. He is bowling in beautiful areas and is once again showcasing the world why he is one of the greatest of all time. He bowled a match-winning spell last time and once again could do the same, given the rain gods permit.

Some thunderstorms and showers are predicted in Centurion ahead of this all-important clash for both sides. Of the four games hosted by this iconic venue, only one game saw a result and another one of such abandonments could favour the home side, who are 4 points clear of the Blitz. The track is going to provide some assistance to the fast bowlers and batting will not be easy in the first innings.

AB de Villiers is always a threat no matter how old he is and we saw some glimpses of his greatness in the last game. Dean Elgar and Wiaan Mulder have encountered a rough patch but they can always come up with big contributions for the side. They have the experience of Van der Merwe and Morne Morkel in the bowling attack, to go with the exuberance of Tom Curran and Lungi Ngidi, making up for a scintillating lineup.

Janneman Malan has been one of the players to watch out for this season and formed a great partnership at the top with skipper de Kock. Liam Livingstone has been a good contributor in the middle order, making their side look pretty solid. Wahab Riaz and Dale Steyn bowling together comes as a great joy to the eye of the fans, not so much for the batting unit. Besides them, they have the quality of Vernon Philander and Anrich Nortje as well.

The prediction is for the Tshwane Spartans to emerge victorious. 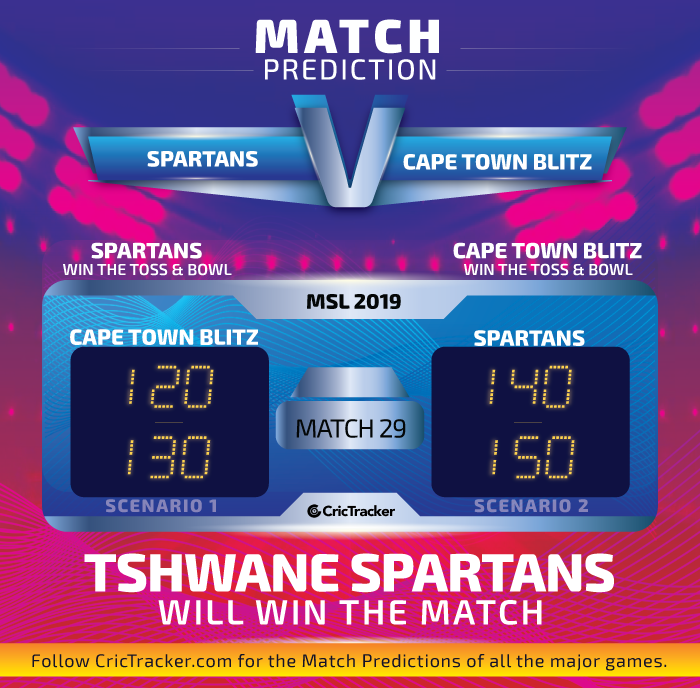