Both these teams have got to work on their bowling attacks ahead of this game.

Just a few days ago, the MSL 2.0 got off to a blistering start with the game between Cape Town Blitz and Jozi Stars. The defending champions and the runners-up last year were involved in a thrilling encounter in which more than 400 runs were scored. With all the intense action, the fans couldn’t have asked for anything better. It was great to watch Dale Steyn fight his way back with an amazing spell. Janneman Malan and Reeza Hendricks left the audience on the edge of their seats with their batting exploits.

And now, within a week, these two teams will square off against each other – this time in Cape Town. The Cape Town Blitz played another game after this match and bagged an embarrassing 86-run loss against the Paarl Rocks. On the other hand, the Jozi Stars lost two games in a row now. At this stage, the onus is on both these teams to play good cricket – with one team obvious to bounce back. Another exciting contest in on the cards as these sides will look to add four more points to their tally.

This will be the first game that will be played at Cape Town in this tournament. The Newlands isn’t the easiest place for the batsmen. Fast bowlers will have a good bit of assistance and this match might not be as high scoring as the one earlier between both these teams. It will be a cloudy day with high levels of humidity and strong winds blowing across.

Moeen Ali, who was supposed to play just the first two games, won’t be a part of the squad for this match. Instead, Asif Ali is expected to feature in the eleven if he is available for selection. Otherwise, the Cape Town Blitz could go ahead with Marques Ackerman who is a good option at number three. Also, since the T20I series against Australia is done, another Pakistan cricketer, Wahab Riaz, is expected to join the side. Thus, the bowling line-up could be strengthened. Dale Steyn will continue to spearhead the bowling attack and Anrich Nortje will hold on to his spot after the impressive performance in the last match.

The Jozi Stars have got a few concerns surrounding their bowling attack. They are yet to find the right combination and might change around slightly for this game as well. In both the games so far, Dane Paterson was quite expensive. There could be a possibility that he’ll be sidelined for this game. Possibly, to strengthen the bowling attack further, they might try Lizaad Williams in place of Delano Potgieter.

Cape Town Blitz are expected to make the best of the home conditions and win this game. 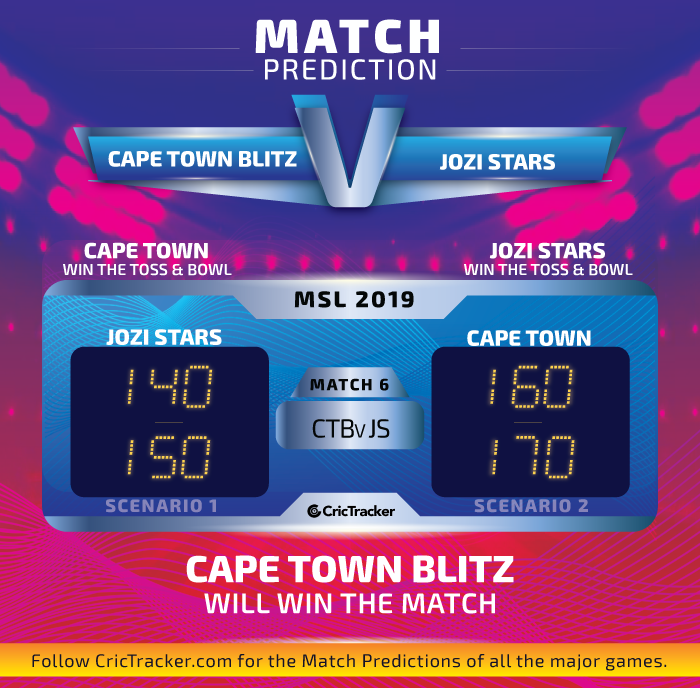