Another abandoned game at the Kingsmead is on the cards with chances of heavy rain in the morning.

The rub of the green hasn’t gone in Durban Heat’s favour thus far. They are the only team in the 2019 edition of the Mzansi Super League (MSL) who are yet to get on the field. Both their home matches at the Kingsmead in Durban got abandoned due to persistent rain. With four points from two called-off matches, the Heat’s third match is against the Cape Town Blitz at home itself.

Back in 2018, the Heat beat the Blitz in Durban while losing their away game. The Blitz, led by Quinton de Kock, has been impressive thus far, having garnered nine points out of three matches. Both their wins have come against the Jozi Stars, who have strained to find their feet after winning the tournament last season. Another win will strengthen their position at the top of the table.

The weather isn’t a promising one as from 9 AM to 11 AM, there are around 55 chances of rain. It won’t be a surprise if a hat-trick of abandoned games takes place at the Kingsmead. The temperature will be around 22 degrees Celsius. If the game happens, DLS should come into play and hence, batting second should be the way forward. The humidity will mostly be in the 60s.

The Heat has Alex Hales at the top and he can be devastating on his day. Dane Vilas has truckload of experience on his shoulders. Khaya Zondo can turn the strike over as well. Ravi Bopara and David Miller have played around the world and a lot will depend on the duo. In the bowling department, the team will look up to Maharaj and Kyle Abbott. Von Berg’s role will be crucial being a leg-spinner.

De Kock and Janneman Malan have set the foundation at the top. In the middle-order Liam Livingstone has 90 runs at a strike-rate of 149.18. Wahab Riaz may get a promotion after his quickfire 29*. Wahab also bowled with venom in his first match of the MSL. Sisanda Magala and Anrich Nortje have five wickets each. Dale Steyn and George Linde have four wickets each to their name.

The prediction is for Cape Town Blitz to win the match. 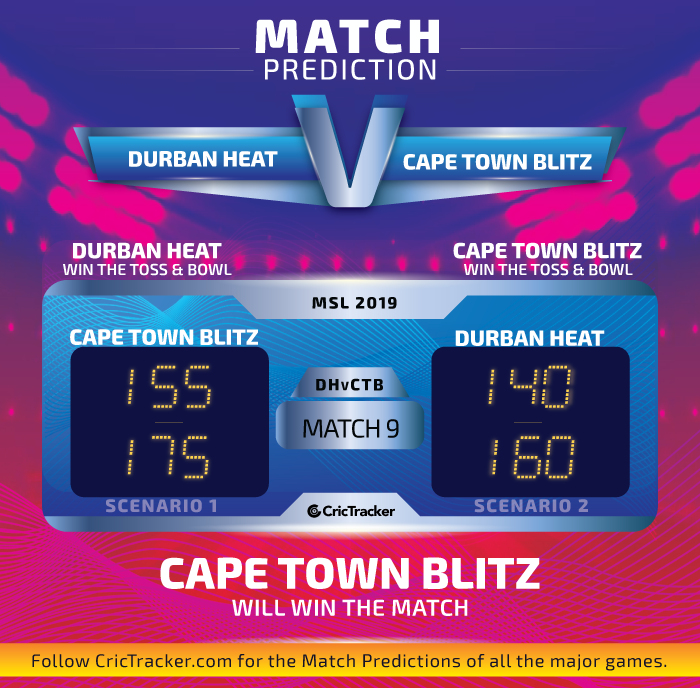