Which team will climb the ladder from the bottom?

The 16th match of the inaugural edition of the Mzansi Super League (MSL) will see two bottom teams in the points table clashing at the Wanderers Stadium. Jozi Stars are set to host the Durban Heat and one of the teams will definitely avoid the ignominy of losing three matches in a row. Despite the fact that they are two of the bottom placed teams, the introduction of bonus point in this competition, is changing things quickly and a big victory in this game will surely help one of the sides climb the ladder.

The Stars were guilty of not fielding well in their previous game against the Spartans as they lost despite posting 186 runs on the board. In front of the home crowd, they will be expecting to improve their showing in order to defeat the Heat who are also not having a memorable campaign so far. The skipper Dane Vilas will be looking forward to going past the opponents and register their first win in three matches at home.

The Heat, on the other hand, have lost their plot completely and were unlucky to lose their previous game. The nine-over game and the DLS intervention made their target look even more difficult and after the early wickets they lost, Durban were never going to chase 113. Having said that, they have a fair way to go in the competition and can still turn around their fortunes.

The ball travels a long way at the Wanderers and this could be the game for the batsmen to pounce in. In a good news for the Heat, there will be no rain interruption during the match and the temperatures will hover around 26-28 Degrees Celsius throughout the 40 overs.

The Stars will have to concentrate on their bowling. Eddie Leie proved to be far too expensive in the last game and might have to make way for Duanne Olivier. In the batting department, we might see a promotion for Petrus van Biljon after 13-ball-42 against the Spartans while Van der Dussen is also expected to set the stage on fire. Reeza Hendricks is in good form and so is the case with Rickelton and the onus will be on them to get the team off to a good start.

The Heat need a blistering start at the top of the order which might see Morne van Wyk coming back into the side in place of Temba Bavuma. Hashim Amla should look to play the anchor’s role while the likes of David Miller and Klaasen are more than capable of clearing any boundary in the world, let alone the Wanderers. Keshav Maharaj and Vernon Philander are two of the best bowlers they have with Abbott and De Lange to assist the duo.

The prediction is for the chasing side to come up victorious as it is very tough to defend a total at the Wanderers. 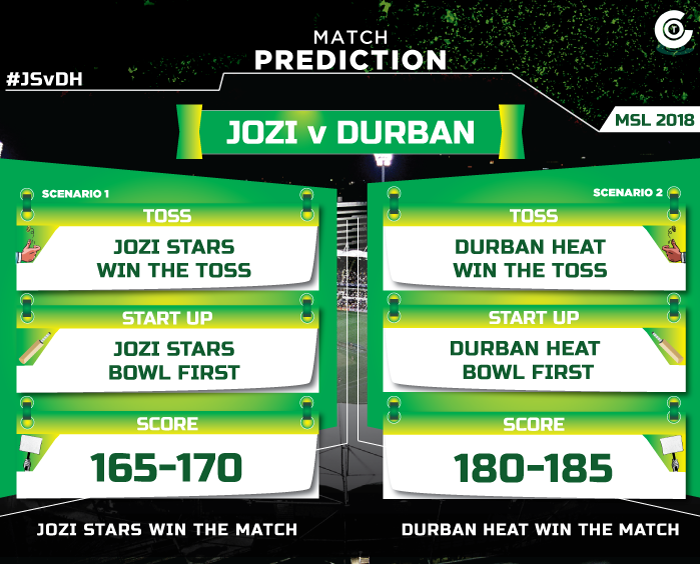