Will Blitz return to their winning ways?

The league stage of the inaugural edition of Mzansi Super League (MSL) is reaching its concluding stages. The teams are fretting over their playoff qualifications while Durban Heat have been ruled out of the equation with only one win from seven matches. However, Paarl Rocks will play one of the most important matches against the table toppers Cape Town Blitz on Friday at the Newlands.

The Rocks currently stand at the fourth position after seven matches and are leading the Tshwane Spartans by only a solitary point. A victory in this encounter will increase the gap between the two teams and the skipper Faf du Plessis will be well aware of the situation. They lost their previous game to the Spartans itself which has made things interesting for the final playoff spot.

On the other hand, the Blitz are playing like the title favourites from the first match. They are ruling the points table so far but would like to shrug off the defeat in the last match and get back on track. Momentum can shift very quickly in T20 leagues and they would want to continue in the same vein now with the playoffs approaching in the next few days.

The last game at the venue was a high-scoring one and a similar kind of pitch might be on offer for this match as well. Having said that, it will remain cloudy during the action in the middle and the temperature will hover around 17 Degrees Celsius. However, if the heavens open up in the night, it might play spoil the Rocks’ equation as things will get even more close for them.

Dawid Malan’s returned for the Blitz in the previous match but that didn’t reap rich rewards for them. The strong batting line-up will be definitely retained for this game as well and the onus will be on Quinton de Kock who has been in some great form with the bat. Janneman Malan should also look to regain his fine touch while Farhaan Behardien and Asif Ali can tonk the ball a fair way.

Dale Steyn and Mohammad Nawaz are the top bowlers in the side with the others should support them in order to restrict the opposition.

Henry Davids’ availability is still not clear which should keep Cameron Delport in the team as an opener. Faf du Plessis and Dwayne Bravo are the important players in the line-up who should constantly take up the responsibility in either department respectively. Jaarsveld and David Wiese are also very good batsmen while the bowlers should also continue the good job they’ve been doing as the attack almost defended 121 against the Spartans.

The prediction is for the Cape Town Blitz to boss the game. 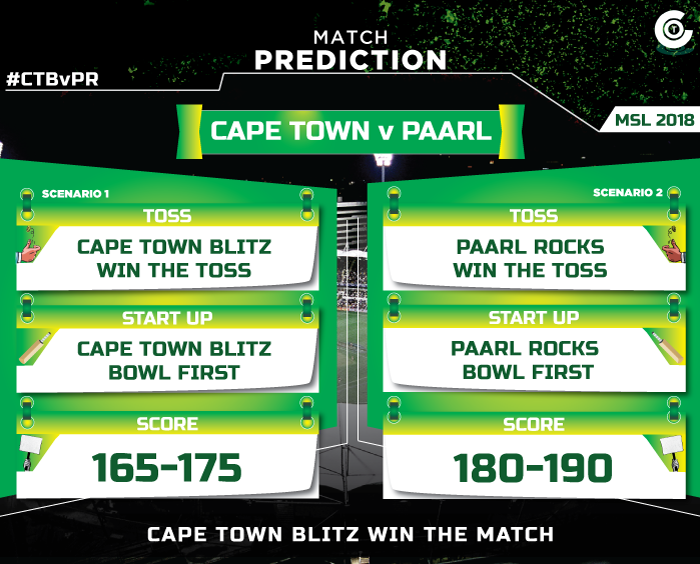