Both sides are in desperate need for a win as a defeat might as well halt their chances of reaching the playoffs.

Both sides are in desperate need for a win as a defeat might as well halt their chances of reaching the playoffs. But the Rocks and the Giants will consider themselves lucky with the extra points they have in their tally due to the matches they lost in rain.

On paper, Paarl are a scintillating side and it will be difficult for their opponents to match them one-on-one. But NMBG have some experienced campaigners like Imran Tahir and Chris Morris, who can change games in a span of few overs. The final day of the group stages have a couple of crunchy encounters before entering the business end.

There’s a good chance that the rain gods might intervene to spoil the fun. It has been over 10 days since a game was played on this track and it seems like the chasing is the best way to go forward. If there’s some rain around, it will be a setback for the Giants who will certainly included their two spinners in the XI.

Aidem Markram and Cameron Delport form a stupendous opening pair and with the likes of Faf du Plessis, Grant Thompson and Patrick Kruger coming in the middle order, they have very little to worry about. Their bowling attack has done a tremendous job as well, with Chinaman Tabraiz Shamsi, Dane Patterson and David Wiese picking the bulk of the wickets.

English stalwart Jason Roy has not been at his best this tournament, but on the final day, a good knock from him can win over the fans’ frustration. Skipper JJ Smuts and Heino Kuhn are expected to be at their best for this titanic clash. The experienced spinning duo of Aaron Phangiso and Imran Tahir will be a cause of many problems for the Giants. Chris Morris and Lizaad Williams too will hold a key role with the new ball. 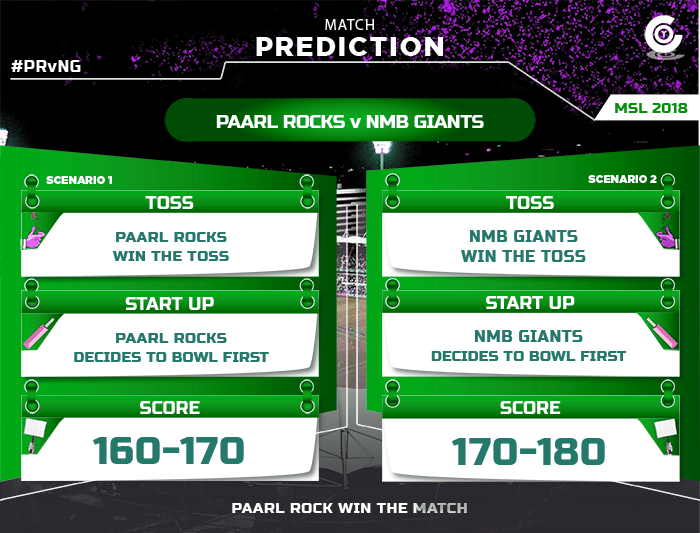