Jake Weatherald can be a good captaincy pick for your fantasy teams. 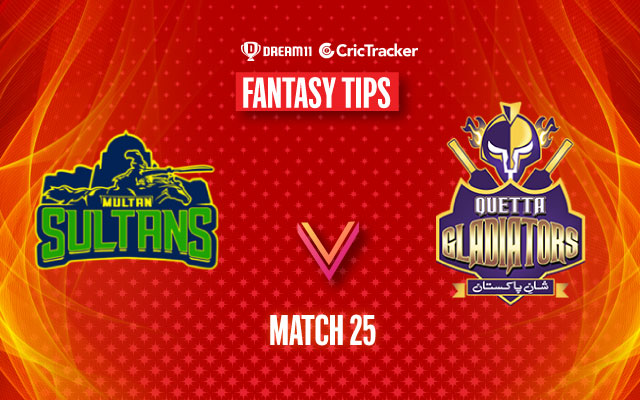 Multan Sultans are doing really well in the second leg of the tournament, as they have won two consecutive matches. Mohammad Rizwan is in form of his life and helped his side to gain their third victory in this league against Peshawar Zalmi. They need to carry the same form in the upcoming matches.

With some inspirational bowling performances against the Lahore Qalandars, Quetta Gladiators broke their losing streak and registered their 2nd win in this league. Jake Weatherald’s signing is a big boon for them and his performances will be crucial in this match as well.

The wicket has got everything on it. There is pace and the spinners are getting turn as well. The batters will get full value if they place it in the gaps. Anything over 170 is a good competitive score on this wicket.

Sohaib Maqsood played a key role in the run-chase against the Peshawar Zalmi, scoring 61 runs from just 31 balls, which includes 4 fours and 5 sixes. Overall in this tournament, he has scored 227 runs at an average of 45.4.

Jake Weatherald, who is playing in this competition for the first time, has already scored 104 runs in 3 matches at an average of 34.66. He can be a good captaincy pick for your fantasy teams.

Mohammad Nawaz changed the course of the game with the ball against the Lahore Qalandars by picking up 2 important wickets at an economy of 4. Overall, he has scalped 5 wickets and scored 99 runs.

Shahnawaz Dhani is second in the list of most wicket-takers in this year’s league, picking up 13 wickets in 6 matches with the best figures of 4 for 31.

Usman Shinwari was the player of the match against the Lahore Qalandars for his incredible spell of bowling, where he picked up 3 wickets at an economy of 8.

Mohammad Rizwan is a must buy for your fantasy teams. He is scoring runs consistently in all forms of the game and he has 408 runs to his name in this year’s league.

MUL vs QUE Must Picks for Dream11 Fantasy Cricket:

Shimron Hetmyer hasn’t got much of a chance so far in this tournament, but he is known for his big-hitting abilities and can be a risky captaincy choice for your fantasy teams.

Mohammad Nawaz is bowling exceptionally well, and it’s tough to go against him when he is getting a turn. You can take a risk and pick him as your fantasy team skipper.

Blessing Muzarabani has played only one match and has picked up a wicket as well. You can avoid him while making your fantasy teams.