My son says when Virat Kohli bats, just wake me up: Michael Vaughan

My son says when Virat Kohli bats, just wake me up: Michael Vaughan 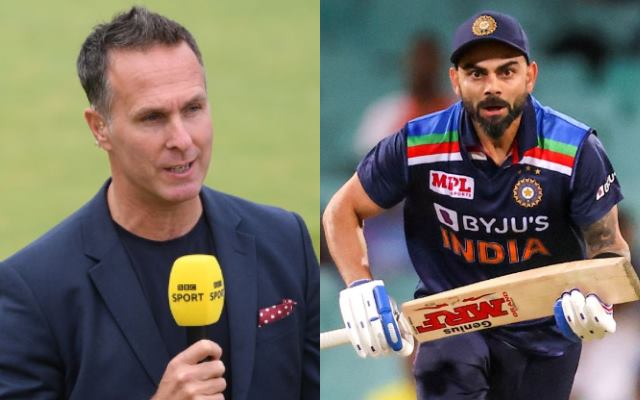 Former England captain Michael Vaughan showered praises on Indian skipper Virat Kohli saying that the latter has a powerful impact on the kids and makes batting looks beautiful and effortless. Speaking about Virat’s batting, Vaughan opined that he is an absolute legend and is the best batsmen of the modern era across all the three formats of the game.

Veteran England captain highlighted that his son is a big fan of Virat Kohli and he wakes up from his sleep only to see the Indian skipper batting. Michael further praised Kohli saying that he is a treat to watch and can effortlessly land the ball in the stands while standing on the crease.

“My little boy is a little player and all he does is, always says to me, when Virat comes out to bat, just wake me up. As soon as Virat goes out getting caught at midwicket, he goes back inside to do something else. He’s that powerful with the kids. When you see shots like that fly off the middle of the bat without any real effort or doesn’t seem like any much effort going into the stroke – it’s just flying into the stands. He’s a special player, he’s an absolute genius,” Michael Vaughan told Cricbuzz.

I worry about those three Tests that India have without Virat Kohli: Michael Vaughan

Speaking about Virat’s skills as a batsman, Vaughan opined that one thing that no one should be concerned about is batting of Kohli as he is a wonderful player and knows about to overcome the hurdles and score runs for his team. The Indian skipper hasn’t been able to score a century in any format since November 2019 while his last ODI ton came in August 2019.

“The one thing I don’t worry about with Virat Kohli is his batting. There is no concern about his batting whatsoever. He is a wonderful player, he’s the best of the era across the formats, there are no doubts about that. I worry about those three Tests that India have without him. I don’t see India being able to win those Tests without the Virat Kohli factor. He is that important for that Test team. His 100s will come. Once he gets one, probably he would get 3-or-4 together, he’s that good,” Vaughan added.