Virat and Anushka are currently in the UAE before the commencement of this year's IPL.

Virat Kohli and Anushka Sharma are considered to be a power couple for all the right reasons. After beginning their love story in the early stage of their respective careers, Virat and Anushka finally tied the knot in late 2017.

‘Virushka’ has been quite active on social media and the pair never misses an opportunity to share photos and clips for fans. Ahead of the much-awaited IPL 2020, Virat and Anushka had stormed the internet after announcing their pregnancy on social media platforms.

The star couple, in August, had shared an adorable picture while sharing the special news with everyone. “And then we were three”, the couple had written in the caption. Virat was seen cradling Anushka’s baby bump in the picture.

On September 13th (Sunday), Anushka again shared a heartwarming picture on Instagram, depicting her baby-bump. She captioned the post, “Nothing is more real & humbling than experiencing the creation of life in you. When this is not in your control then really what is?”

Nothing is more real & humbling than experiencing creation of life in you . When this is not in your control then really what is ?

Her Instagram post was flooded with likes and comments in no time but it was Virat’s reply that caught everyone’s attention. Responding to Anushka’s lovely image, Virat wrote in the comments section, “My whole world in one frame.” Apart from the current India skipper, many celebrities reacted to Anushka’s picture. 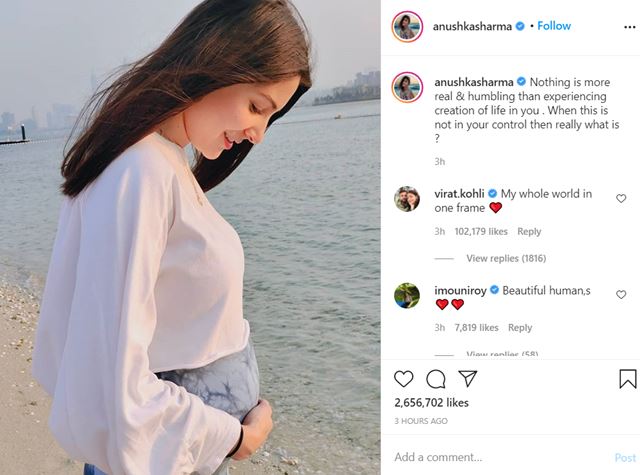 The couple is expecting the birth of their first child by early 2021. Considering Virat and Anushka’s connection with Team India and Bollywood, their pregnancy news was flooded with congratulatory wishes from several prominent names.

Virat and Anushka are currently in the UAE before the commencement of this year’s IPL. Amid coronavirus pandemic, the high-octane league is scheduled to start from September 19th, with Kohli-led Royal Challengers Bangalore opening their campaign versus Sunrisers Hyderabad (SRH) on September 21st.

In a recent interview with RCB’s Youtube channel, Virat had also opened up on the excitement of becoming a father. “It is (an incredible feeling). It puts things in perspective for you… It’s a beautiful feeling, that’s all I can say. It’s very difficult to describe how you feel but ya, when we found out obviously we were over the moon and then, when we announced recently, the kind of love that was showered on us… genuinely people were so emotional and happy for us. Ya, we’re really looking forward to that third member joining the clan,” Virat had said.

Enjoy the big hitting from Jason Roy in the Abu Dhabi T10 League.