Nathan Lyon: A century to savour

Nathan Lyon: A century to savour

A special 'Test’ awaits Lyon at Brisbane when he walks out in Australian colours for the 100th time in Test cricket.

The year was 2013. The setting was the Chepauk stadium in Chennai. India’s batting maestro, Sachin Tendulkar was on strike and closing in on yet another Test hundred. But then, the master was undone by a delivery that took him by surprise. The off-spinner flighted the cherry and pitched the ball outside off stump. Tendulkar went for the drive; the ball went through the master’s defence and the stumps were dislodged.

That was the sign of greater things to come, and from that Test match almost eight years back, Nathan Lyon has travelled a long way. And now, he is on the cusp of a feat that he will savour for the rest of his life. When Lyon takes the field on 15th January 2021, he will achieve a rare century. The off-spinner will feature in his 100th Test match for Australia, a feat that has been achieved by just 12 Australians before him.

In a career that has already lasted almost a decade, Lyon has firmly established himself as one of the greatest bowlers of the modern era. Before going further, let us delve into some numbers that will help us understand the heights that the off-spinner has already achieved.

The numbers that Lyon has generated in his Test career are glittering. In the table below, let us take a look at the top 5 highest wicket-takers for Australia in Tests. 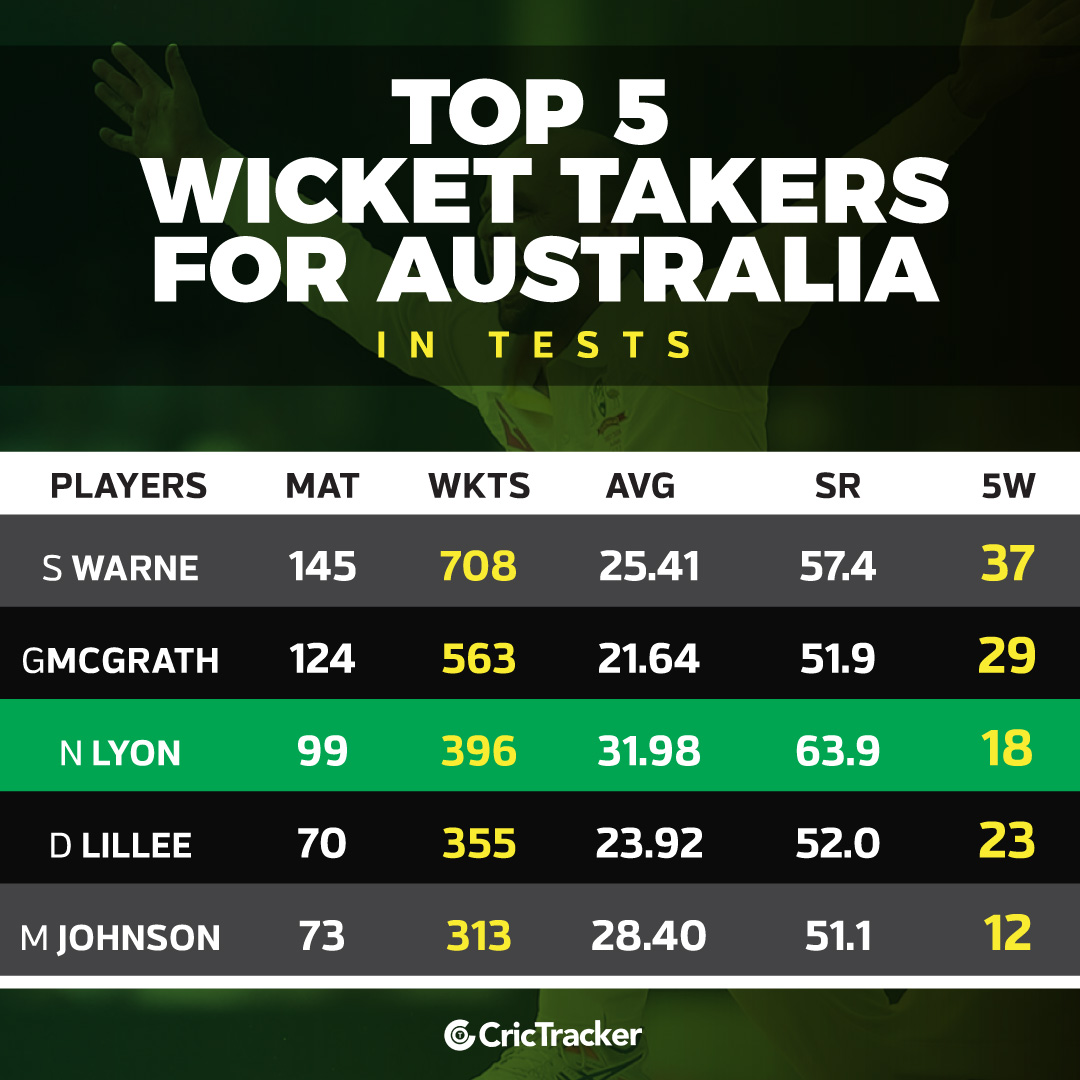 From the above table, we can see that Lyon is already the third-highest wicket-taker for Australia in the whites. The off-spinner is also closing in on 400 (396) Test wickets and has taken as many as 18 five-wicket hauls in the longest format of the game. Lyon also stands fifth in the list of Australian bowlers who have taken the most five-wicket hauls in an innings and is only behind Shane Warne, Glenn McGrath, Dennis Lillee and Clarrie Grimmett.

Also, among the 12 Australians who have played 100 or more Test matches, the list has just two bowlers- Shane Warne and Glenn McGrath. Now, Lyon is all set to join the illustrious duo as the third Australian bowler ever, to complete a century of Test matches.

A giant of the modern era

In the table below, let us take a look at the top five highest wicket-takers in Tests among active cricketers to understand Lyon’s impact. 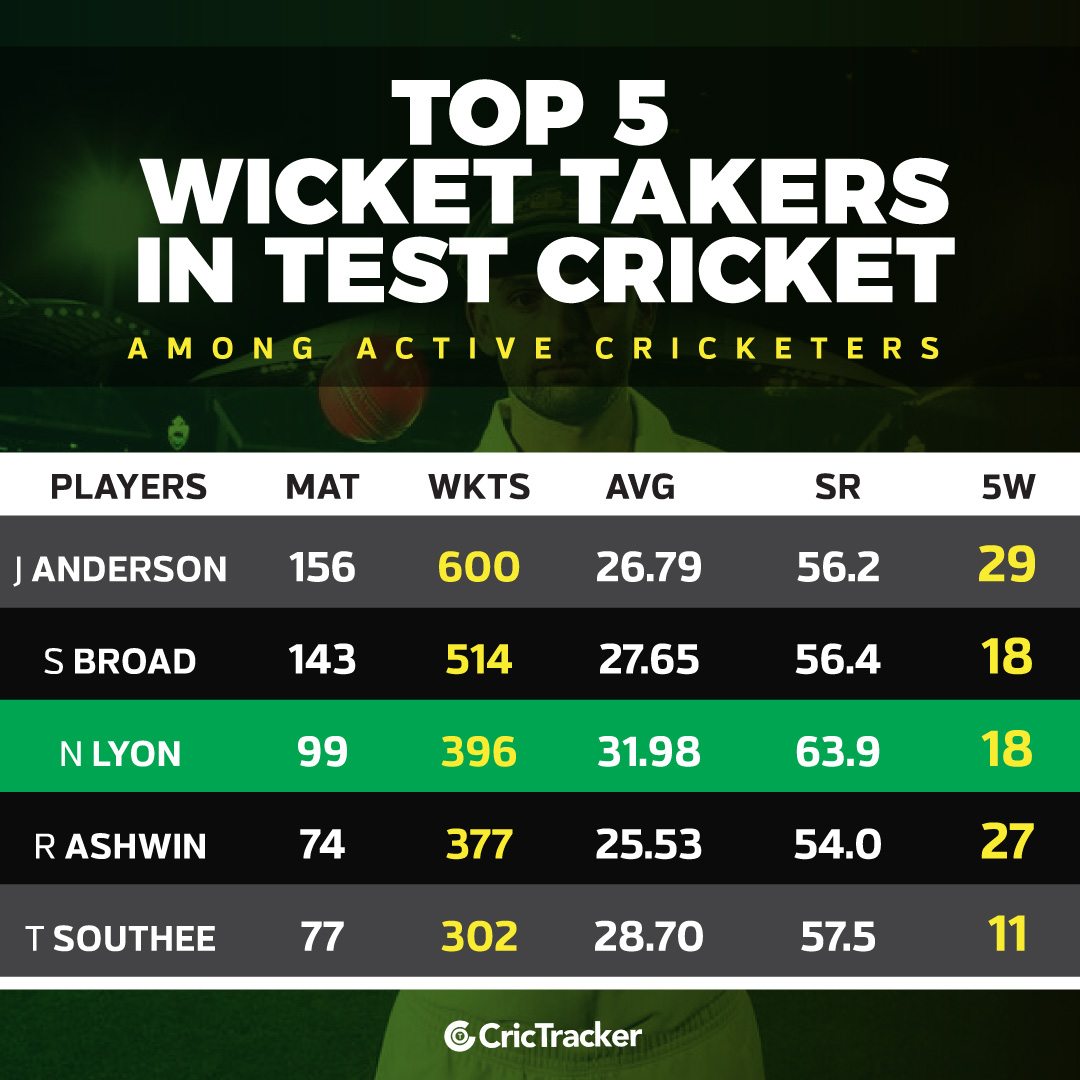 Another factor that makes Lyon such a vital cog in the Australian bowling setup is the fact that he is a sure shot match-winner. In the table below, let us take a look at Lyon’s numbers whenever his side has won a Test match. 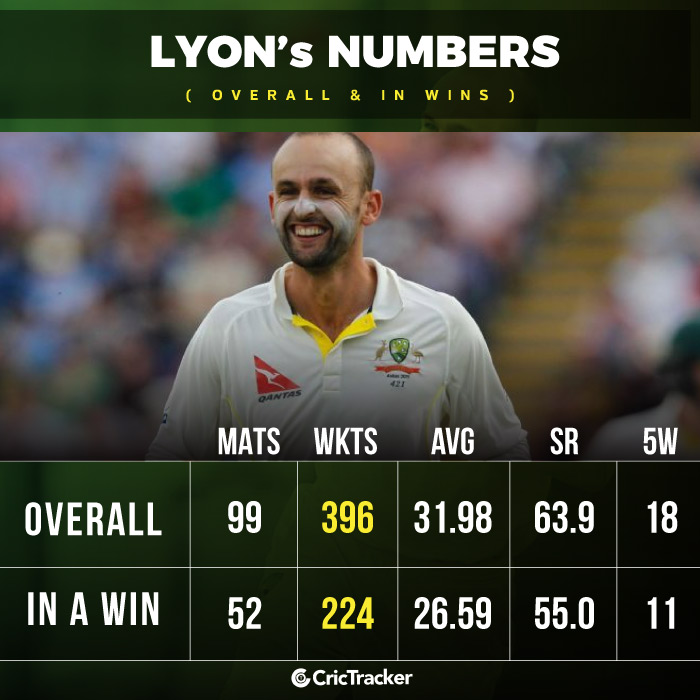 Now, let us go one step further, and look at Lyon’s numbers in a win away from home. The table below illustrates the same. 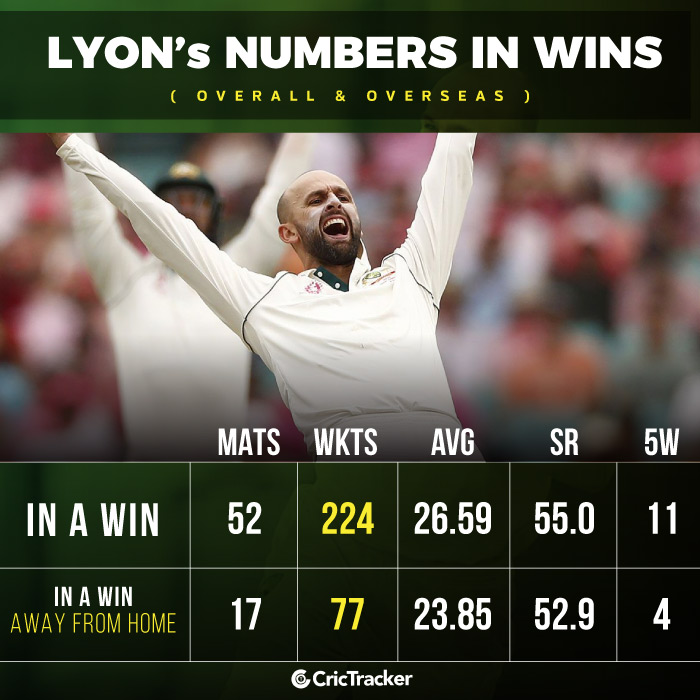 When Lyon is in away shores, his numbers in a win for Australia are even better. While he averages 26.59 in a win, that number further comes down to just 23.85 in away shores. Also, his strike rate comes down to 52.9 from 55.0 in a win away from home. That shows that Lyon stands up when he is thrown out of his comfort zone.

Now, let us go ahead and compare Nathan Lyon’s records against the four other contemporary bowling greats in a win away from home in the table below. 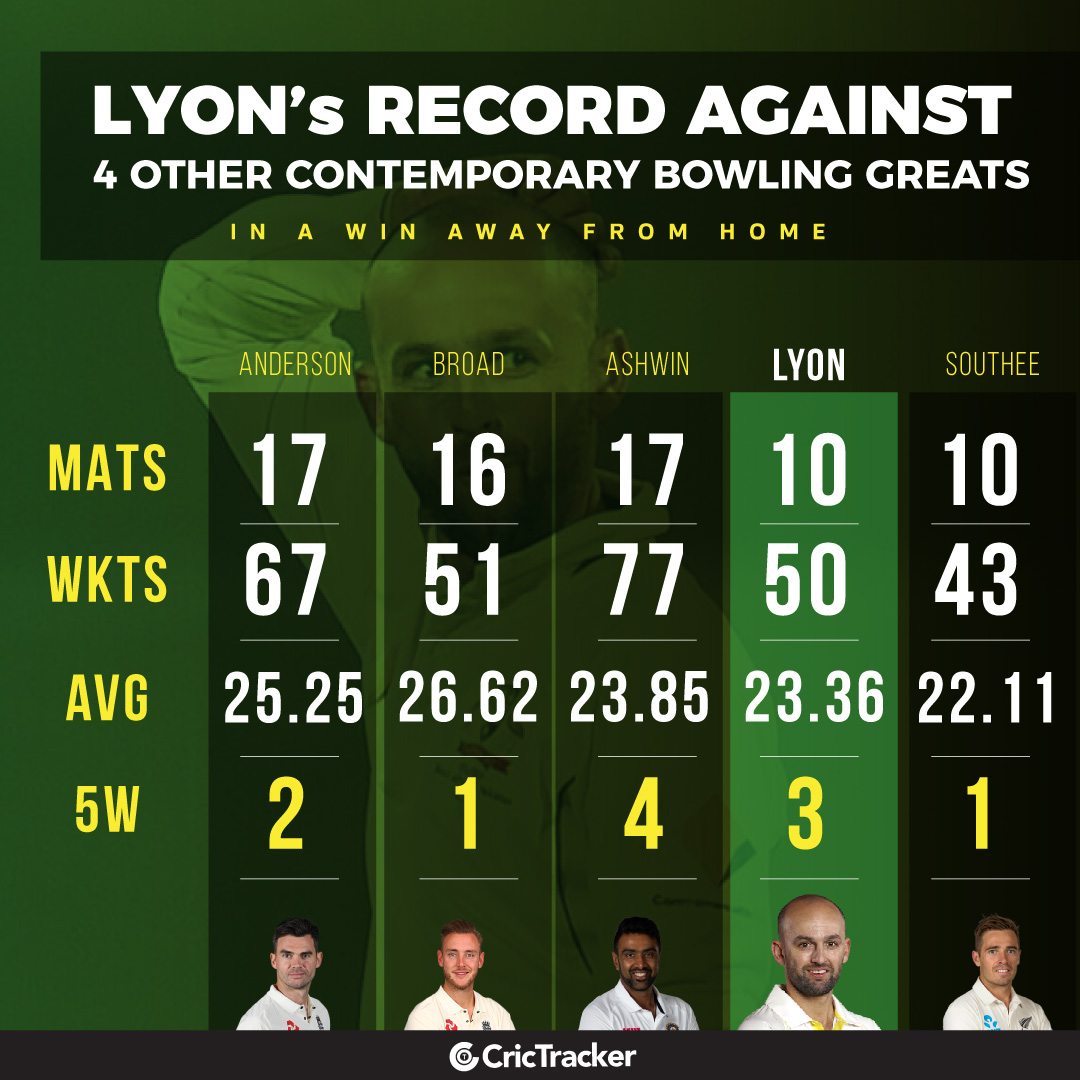 Comparing Lyon with the other bowling gladiators of the modern era is indeed revealing. Lyon has the most wickets (77) in a win for his country away from home among the five bowlers. Also, the off-spinner has taken the most number of five-wicket hauls among the bowlers in a win away from home as well.

Lyon also easily outperforms Anderson and Broad when numbers away from home in a win are taken into consideration and beats the England duo in every parameter.

A special ‘Test’ awaits Lyon at Brisbane when he walks out in Australian colours for the 100th time in Test cricket. The closely fought Test series between India and Australia is currently locked at 1-1 and will enter its climax on January 15th.

And, whoever wins the final rubber at The Gabba will take home the Border-Gavaskar trophy. Lyon will surely want to make his 100th appearance for the kangaroos special, by spinning Australia to a series win in the fourth and final Test in Brisbane.