The two teams are facing each other at the international level for the first time.

The five-match T20I series between Nepal Women and Uganda Women is all set to commence on Monday (May 16). All the matches of the series will be played at the Tribhuvan University International Cricket Ground Kirtipur. This is a good opportunity for the two teams to showcase their skills at the international level given the fact that they don’t get much chance to play, more so due to the COVID situation across the world over the last couple of years.

These two teams are facing each other for the first time at the highest level. If Nepal Women’s international experience is considered, they have lost only five out of 22 matches they’ve played so far. As for Uganda Women, they have played a total of 31 T20 Internationals so far and have lost 18 games and won 13 of them. It goes without saying that the Uganda players will have to be on their toes more in order to gain an early upper hand in this series.

The venue has hosted a lot of T20 and One-Day matches in the last month or so. The recent Men’s series between Nepal and Zimbabwe A also witnessed a few high-scoring matches. The scores in this series might not be higher but a sporting pitch is expected. To start with, the team winning the toss might bowl first.

Indu Barma was the second highest run-getter for Nepal Women in their previous tournament scoring 81 runs in five innings at a decent average of 27. Nepal’s top player Sita Rana Magar might not play this match as she might not be able to reach in time for this game having played the final of Fairbreak Invitational T20 for Tornadoes Women. In her absence, Indu will have to play a crucial role with the bat.

Kabita Kunwar was the joint-second highest wicket-taker in the previous tournament when Nepal Women took the field. She took four wickets in 17 overs she bowled across five matches. Her economy of 4 was also one of the best and she will play a huge role yet again in keeping the Uganda batters quiet. 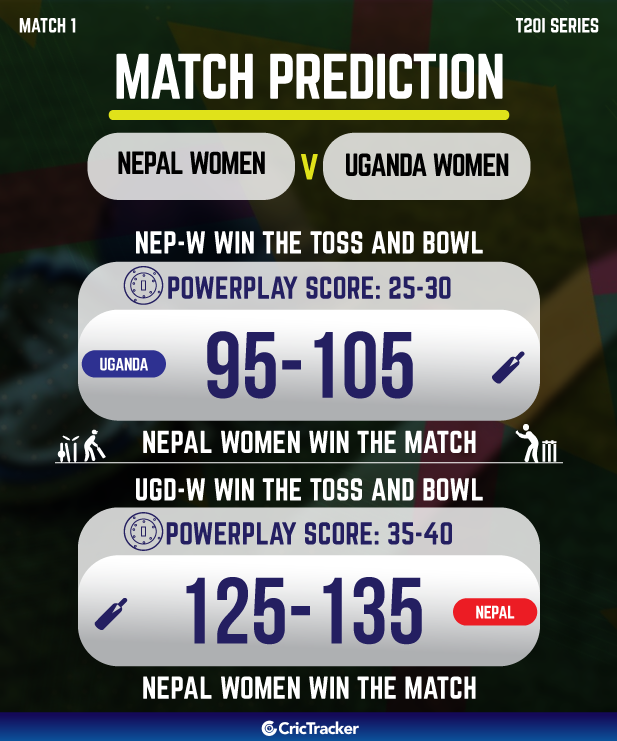