Ashwin, Rahane, Pujara and Saha will take part in this game.

The second and final Unofficial Test of the two-match series between New Zealand A and India A will be played at Bert Sutcliffe Oval in Lincoln.

New Zealand A and India A will face-off for one final time in the second Unofficial Test match in Lincoln from Friday. This match is crucial for senior Indian team’s Test specialists in Cheteshwar Pujara, Ajinkya Rahane, Wriddhiman Saha and Ravi Ashwin who have already reached New Zealand. As far as the first match of the series is concerned, the Indian batsman struggled in the first innings.

They were bundled out for just 216 runs in 54 overs after which the bowlers also couldn’t make a mark conceding 562 runs picking only seven wickets in 160.1 overs. The batsmen, however, made amends for the poor show in the first innings with the likes of Priyank Panchal, Hanuma Vihari scoring centuries while Shubman Gill proceeded to smash a stunning double ton.

The forecast for this match is decent with the rain likely to make its presence felt on the second day. For the rest of the days, it will remain a bit cloudy with sun playing hide and seek. The temperature will hover in the late 10s according to AccuWeather on all days.

There is not much information about the venue hosting a four-day game. Though it should be typical pitch like other venues in New Zealand with something or rather a lot in it for the pace bowlers in the first couple of days before the surface flattens out from the third day. The team winning the toss is expected to bowl first.

Ashwin, Rahane, Pujara and Saha will take part in this game. They have already reached New Zealand and have trained with the team.

India A have only 12 players in their squad and only one of the bowlers will sit out for this game. However, according to Dream11, Vijay Shankar is also the part of the squad. So we are considering him in the XI.

For New Zealand A, Mark Chapman is not available as he is part of the national team in the ongoing ODI series.

Cheteshwar Pujara and Shubman Gill become your top picks automatically from India A side for this match. The latter smacked a double hundred in the second innings of the previous game while Pujara is also coming off a strong show in domestic cricket. Vihari is also in good form having scored a century in his previous outing. Ishan Porel can make the ball talk at pace and will be key for the visitors.

For the home side, Dane Cleaver scored 196 in the previous Test while the Will Young is also a talented cricketer and can be picked in your Dream11 Fantasy team. Cole McConchie is another exciting pick. He scored 50 with the bat and also picked three wickets. Daryl Mitchell is a veteran in the first-class arena and has played 2016 FC matches scoring more than 13000 runs. 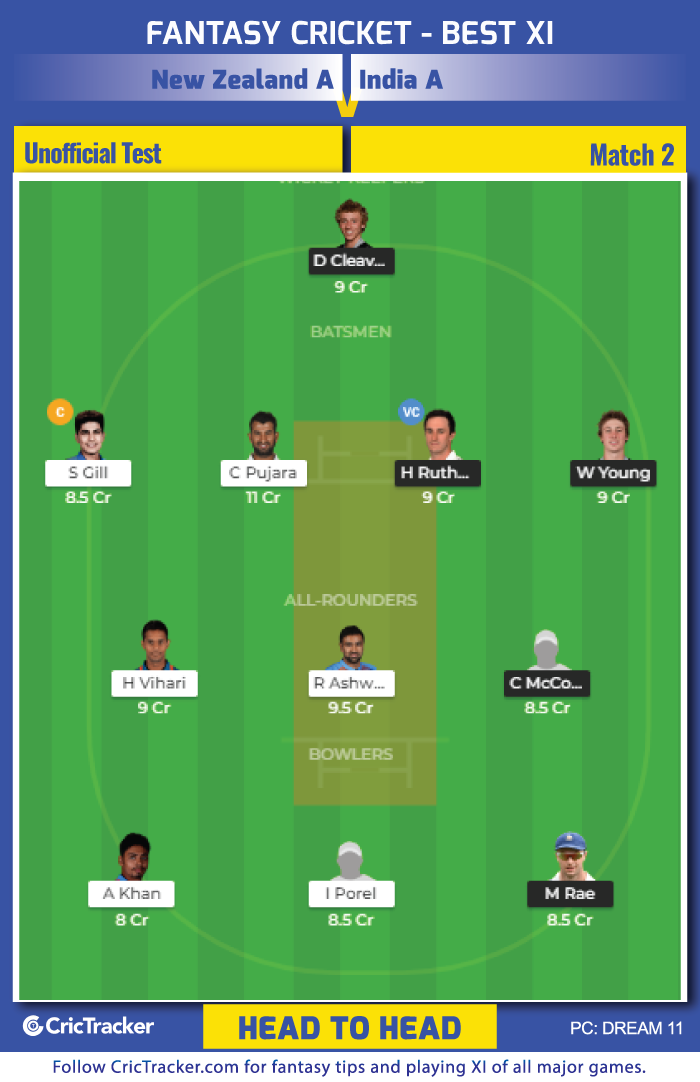 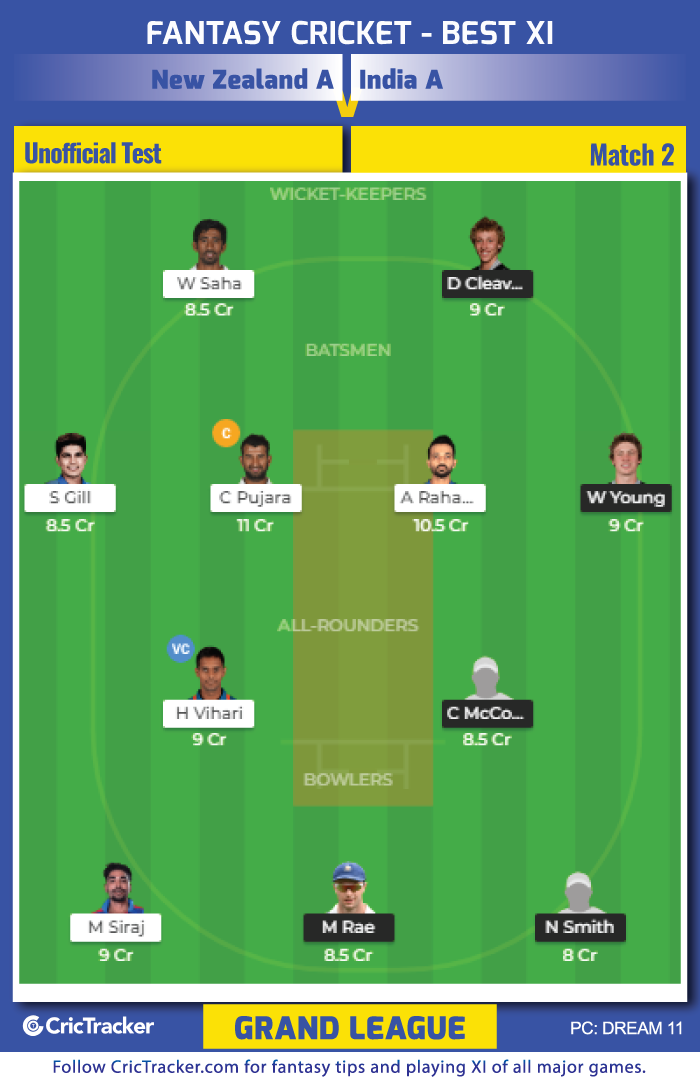 There is a lot of confusion around New Zealand A squad as no official squad announcement of replacement players has been made. Pick the players who are sure to play in this match.

Rahane generally takes a little bit of time to get accustomed to the conditions and might not get a big score in this match. So we have skipped him in the Head to Head team.

The game is likely to end in a draw once again.