Towhid Hridoy and Mahmudul Hasan Joy average 53.14 and 52.72 respectively with the bat in Youth ODIs in 2019

The 1st match of the 5-match Youth ODI series between New Zealand Under-19s and Bangladesh Under-19s will be played at the Bert Sutcliffe Oval in Lincoln.

This game will be streamed on New Zealand cricket website.

Bangladesh Under-19s will be touring New Zealand for a 5-match Youth ODI series which will serve as a preparation for the U19 World Cup to be hosted by South Africa next year. This tour was supposed to be held in April this year. But it was called off due to the terror attacks in March. The hosts New Zealand U19s have played only one ODI series since the 2018 U19s World Cup hosted by them.

They toured Australia for a 5-match Youth ODI series in July which the hosts won 3-0 after the first two matches didn’t produce a result. On the other hand, Bangladesh U19s were part of a Tri-series in England and in the Youth Asia Cup over the last three months. Bangladesh made it to the finals of both the tournament and ended up losing in the finals to India on both occasions.

Clear weather is expected to be seen during the first match of the series. The sky will be partly cloudy on Sunday but there is no rain is predicted in the weather forecast.

The Bert Sutcliffe Oval hosted eight matches during the last U19 World Cup. The last five games had an average scored of 246 with the batting first side crossing 250 on four instances. Barring the game where the first batting team posted 300+, the targets in the remaining matches were successfully chased down.

Adithya Ashok was New Zealand’s most consistent player during the Youth ODI series against Australia. He ended up with seven wickets in three games by taking at least two scalps in each match. Rhys Mariu scored the lone century for the Blackcaps during that series. Conor Ansell scored 30 runs in the warm-up game for Canterbury. He scored a hundred in the U19 competition in the 2018/19 season and was the only player with two tons in the 2017/18 season in the U17 competition.

Thomas Zohrab scored 37 while opening in the warm-up. He was impressive in the 2018/19 U19 tournament scoring 360 runs in 8 innings at an average of 72. Ollie White would be seen batting in the top-order and also bowling few overs. Bangladesh’s Towhid Hridoy and Mahmudul Hasan Joy average 53.14 and 52.72 respectively with the bat in Youth ODIs in 2019. Mrittunjoy Chowdhury has taken 19 wickets from 10 Youth ODIs in 2019 at an average of 21 with help of 4-wicket hauls.

Shamim Hossain has scored 202 runs at an average of 28.85 and took 11 wickets at 29.09 in last ten Youth ODIs. He will be a safe option as vice-captain as he is likely to bowl more overs than usual. 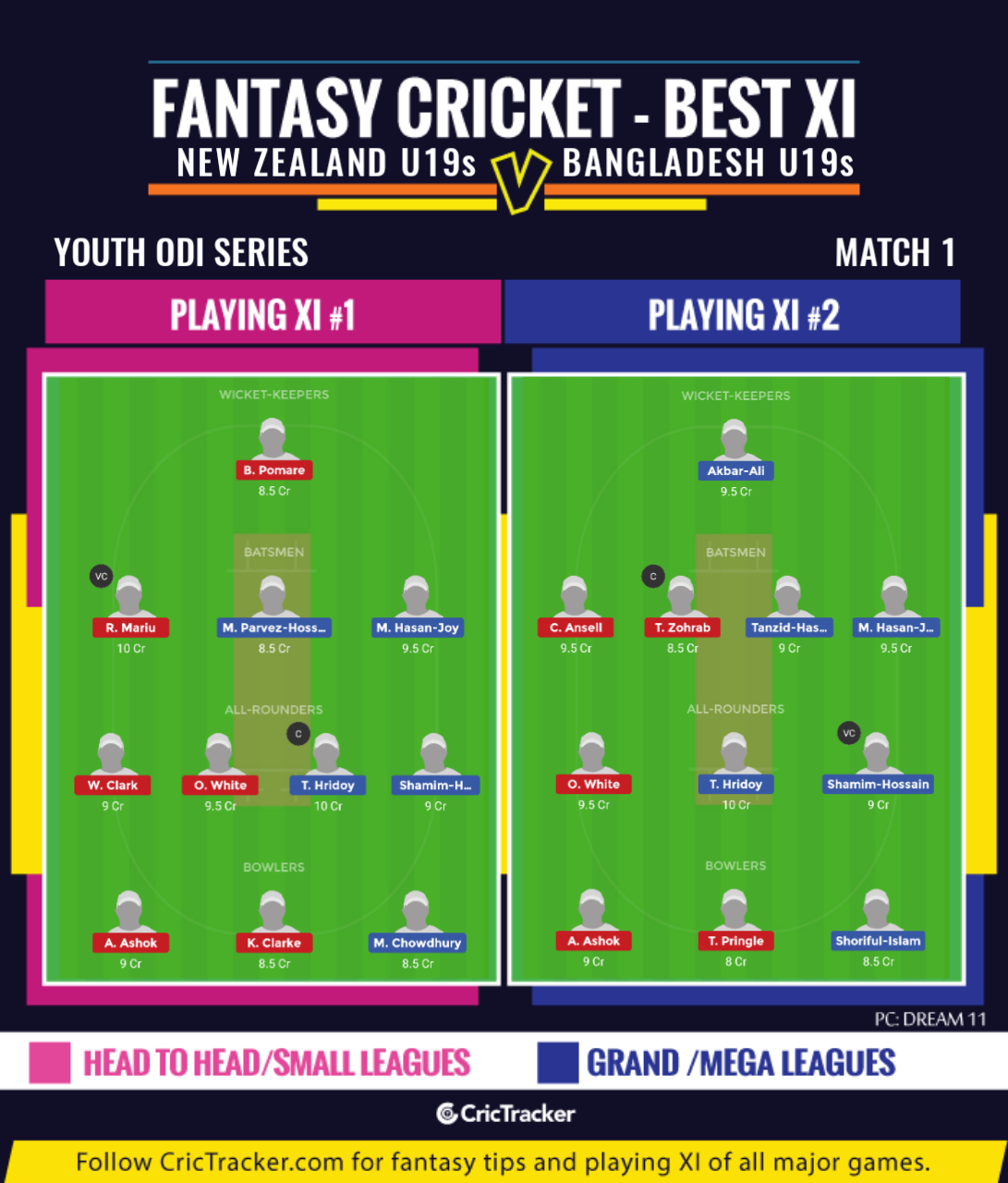 New Zealand Under-19s picked as many as 18 players for this series. They have named it as a development squad for the upcoming U19s World Cup. This makes predicting their XI a tough task given the available options. As a result, we have to wait for the toss update for making a perfect fantasy team.

The experience of Bangladesh Under-19s will allow them to take a 1-0 lead in this series.