Watch out for Ollie White who can play big knocks opening the batting and is capable of picking up key wickets as well later on.

The 3rd match of the 5-match Youth ODI series between New Zealand Under-19s and Bangladesh Under-19s will be played at the Bert Sutcliffe Oval in Lincoln.

Bangladesh Under-19s are one game away on the New Zealand tour to seal the Youth ODI series as they took 2-0 lead in the 5-match series against the New Zealand Under-19s. They started the series with a 6-wicket win and replicated the same in the 2nd ODI as well. The game was supposed to be played on October 2nd but was forced to be played on reserve day due to rain on the actual match day.

Thomas Zohrab anchored the innings while others kept throwing their starts away. The opener scored a 142-ball 112 to push the team total to 242/6. Tanzid Hasan (65) and Mahmudul Hasan Joy (99) scored the fifties to ease the chase for the visitors. Mahmudul Hasan fell one run short of his century when Bangladesh were eight runs short of completing their 2nd straight win.

Sunday is expected to be clear at the Bert Sutcliffe Oval without any chances of rain at any time during the day.

New Zealand U19s didn’t struggle with the bat in the previous game despite scoring only 242/6 in their 50 overs. It was rather the quality of the Bangladesh bowling which kept the things quite. Their batsmen did make the target look easy by chasing it down with 21 balls to spare. Usually, the Bert Sutcliffe Oval usually witnesses the sides batting first scoring 250+ in Youth ODIs. More than often, they get chased down as well.

Thomas Zohrab showed his potential by scoring a century and will be crucial for his team’s chances. Conor Ansell has got starts but has failed to convert those. Mahmudul Hasan Joy has a pretty good record in Youth ODIs and his 99 in the previous game was an example of that. The Bangladesh trio of Tanzim Hasan, Mrittunjoy Chowdhury and Shoriful Islam have been taking majority of the wickets in this series.

Watch out for Ollie White who can play big knocks opening the batting and is capable of picking up key wickets as well later on. 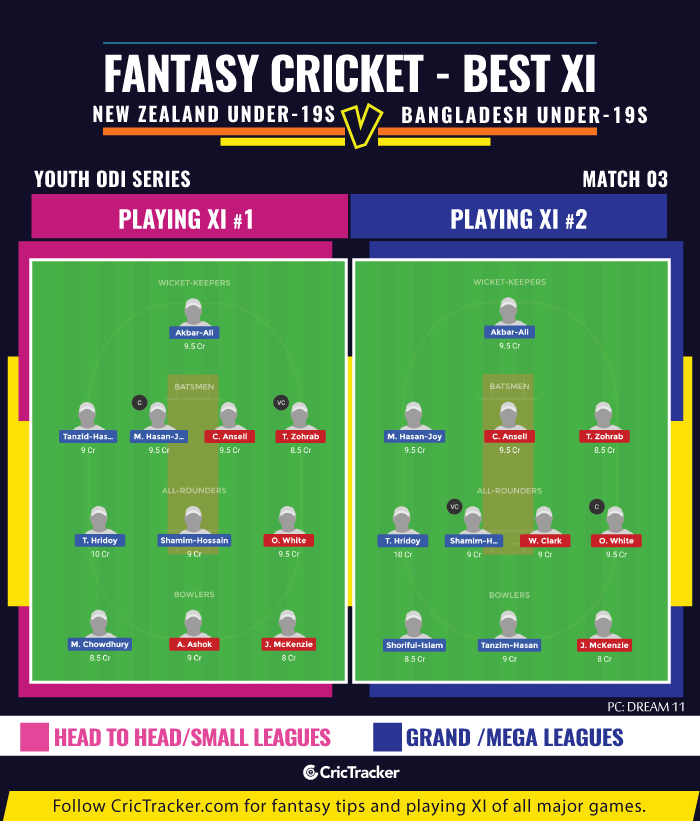 Akbar Ali becomes a must in the fantasy due to uncertainty of the keeper whom the home team would be playing with. Ben Pomare played first ODI while Quinn Sunde featured in the 2nd for NZ U19s.

Bangladesh Under-19s are expected to seal the series by taking a 3-0 lead.