JM Tashkoff has to be your captain in the Dream11 Fantasy team as he bats at number five and bowls 10 overs.

The 5th and final game of the 5-match Youth ODI series between New Zealand Under-19s and Bangladesh Under-19s will be played at the Bert Sutcliffe Oval in Lincoln.

New Zealand U19 pulled one back on the visiting Bangladesh U19 by winning the fourth of the five-match One-Day series. The visitors have already won the series by winning the first three matches of the series and will be keen on ending the tour on a high. However, the young Kiwi players would want to build on a brilliant performance in the previous where they chased down 296 runs on the back of a strong show from the batsmen.

Bangladesh U19, on the other hand, rested a few of their top players to test the bench strength. They continued to bat well with four of their batsmen going past the 50-run mark to post 295 runs in 50 overs. However, the bowlers couldn’t defend the score as the hosts’ batsmen putting up a brilliant show.

It will be cloudy in Lincoln on Sunday. While the game might start on time, the heavens are likely to open up in the afternoon. Though a shortened game should be completed. The temperature will hover around 8-12 Degrees Celsius while the humidity (85%) might trouble the players.

All the four matches played in the series have been won by the chasing teams so far. The conditions in the morning favour the pace bowlers which leads to the team batting first starting slowly. The ball comes on the bat nicely in the afternoon. Expect the trend to continue as the team winning the toss should bowl first again.

Average first innings score: 234 (4 matches in this series so far)

JM Tashkoff has to be your captain in the Dream11 Fantasy team. He is one of the consistent players for New Zealand colts this series. He bats at number five and then bowls 10 overs of his spell picking at least a couple of wickets.

For Bangladesh U19, Mahmudul Hasan Joy and Towhid Hridoy are two of the best players who will more often than not score runs with the bat. The latter also bowls four to five overs which makes him C or VC material in the Dream11 Fantasy team. 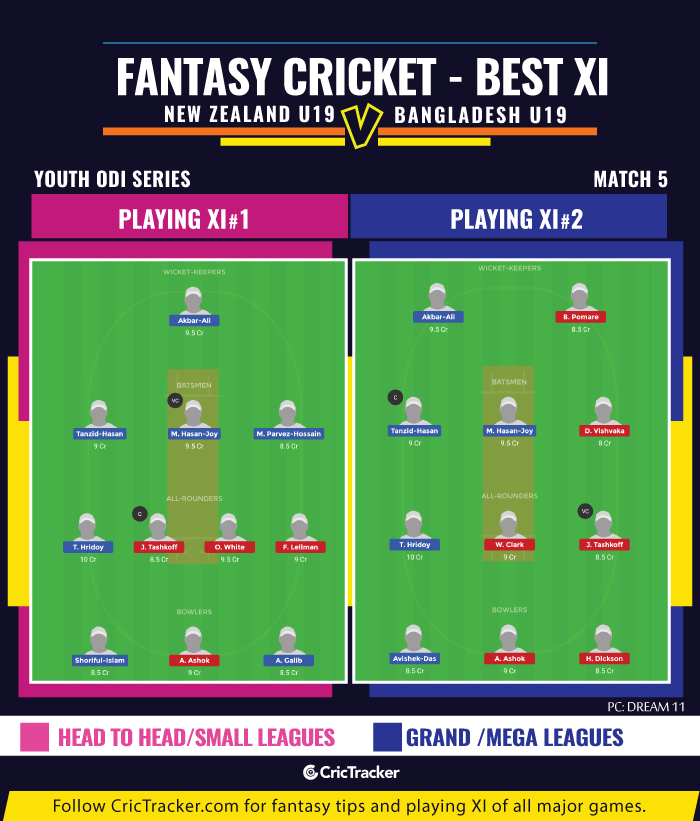 You will get match updates on New Zealand Cricket’s official website under Live Score tab. In case, the playing XIs aren’t announced on time, you can refer above playing XIs to create your team. Most of the players from our suggested Dream11 Fantasy teams will play.

Bangladesh Under-19s are expected to end the series with another victory but expect the game to be a close affair.