In 2019, Joe Root batted in 18 Test innings so far. The English skipper failed to reach the double figures on seven occasions and these include three ducks as well.

The 1st Test of the two-match series between New Zealand and England will be played at the Bay Oval in Mount Maunganui.

After the conclusion of a thrilling T20I series, the modern-day rivals New Zealand and England gear up for a fresh challenge ahead. The two teams will square off for the first Test at the Bay Oval as there are different agendas for both these sides for this series. Kane Williamson is back for the hosts and they have got a few other players returning to the squad as well. Thus for them, it is about hitting the right combination as well as accommodating their best players in the first-choice eleven. It might seem slightly tough but the conditions may dictate the selection process.

On the other hand, there have been concerns for England around their Test team. The onus for this series, of course, will be balancing the exuberance of youth along with some experienced cricketers. A couple of players await their debut as the Brits are eyeing to solve many of their problems, especially with the batting. With Joe Root back at number four and Joe Denly to continue at three, Ollie Pope will have a new challenge at six on his return. There are some new talents in the bowling department as well but England is likely to go ahead with the tried and tested combination.

The weather will be mostly sunny on all the five days during this Test. Temperatures are predicted to be moderately cold. Since there is the ocean nearby, the humidity levels are expected to be high.

After a long time, the Bay Oval has finally got its opportunity to host its first Test match. Thus, there is great excitement all around on how the pitch would behave. Of what we have seen so far at the venue, batting isn’t really easy. There is a good amount of assistance on offer for the pace bowlers. So, expect the pitch to be a sporting one as it usually is.

Kane Williamson, Ross Taylor and Ben Stokes are three players you must have in your Dream11 Fantasy team irrespective of the credits issues. Likewise, Trent Boult and Jofra Archer are good picks from the bowling department. Thee five players form your top picks for this game. 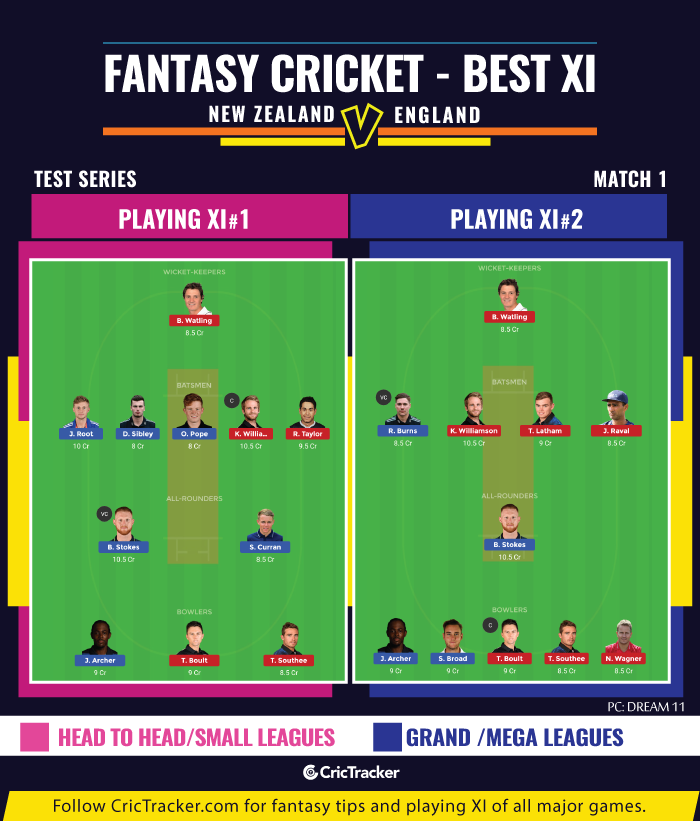 In 2019, Joe Root batted in 18 Test innings so far. The English skipper failed to reach the double figures on seven occasions and these include three ducks as well. He hasn’t been as consistent as he usually is. Even in the recent practice game against New Zealand-A, he got out for just two runs.

Thus, your own discretion is advised if you want to pick him in both your Dream11 Fantasy teams. If you don’t do that, you have the option of going for some other quality players in at least one of your sides.

New Zealand is expected to win this encounter and take a lead in the series.