Top-order batsmen will be dependable options with the nature of pitch favouring them. Colin Munro and Jonny Bairstow, who are available 9.5 and 10 credits respectively in Dream11 Fantasy, should do the trick.

The 2nd T20I of the five-match series between New Zealand and England will be played at the Westpac Stadium in Wellington.

After a victorious start to the five-match series, England looks to continue in the same manner as they face New Zealand in the second T20I. In spite of resting most of their first-choice players, the visitors were impressive. Boosted by James Vince’s fifty, England made light work of New Zealand’s score in Christchurch.

The likes of Pat Brown and Sam Curran also made a successful start to their T20I career at the expense of the hosts. Although they did end up on the losing side, New Zealand will look to level the series with Ross Taylor and Mitchell Santner looking in decent form. With the action moving to the Westpac Stadium in Wellington, a competitive game between two of the best sides in world cricket beckons on Sunday.

A sunny day awaits the two sides although the temperature is expected to hover around 20 degrees Celsius. While there is minimal cloud cover at the venue, the humidity of 65% with a breeze is also on the forecast, according to AccuWeather.

The Westpac Stadium in Wellington is usually a good pitch to bat on with the average first innings score here being in excess of 170. While there is some spin on offer, the shorter boundaries go against the spinners. Pacers should revert to change-ups in order to restrict run-scoring. All in all, a high-scoring match beckons.

Joe Denly has been ruled out of the T20I series due to ankle injury. England will not name his replacement.

Tim Seifert scored 32 runs in the first T20I although he did look itchy in the middle. Nevertheless, his record at the Westpac Stadium is solid with the NZ keeper scoring his career-best 84 at this very venue against India. Colin Munro is another individual who couldn’t convert a start in Christchurch.

Considering his reputation and record in T20I, Colin Munro is a bankable option. Jonny Bairstow has scored 78* and 35 in his two outings so far in the tour. His performance at the top of the English batting unit is crucial to their fortunes. These players should be picked in your Dream11 Fantasy side. 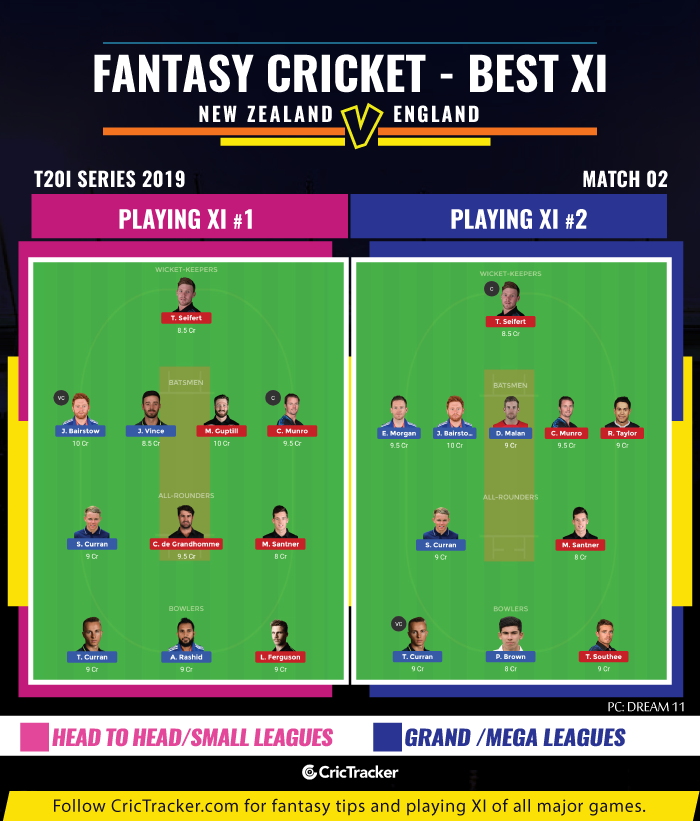 Top-order batsmen will be dependable options with the nature of pitch favouring them. Colin Munro and Jonny Bairstow, who are available 9.5 and 10 credits respectively in Dream11 Fantasy, should do the trick.

Sam Billings bats down the order which doesn’t guarantee many fantasy points. This paves the way for the selection of Tim Seifert, who has a good record at the ground as well.

New Zealand is expected to level the series on Sunday.