It will be interesting to see who among Tom Latham and Henry Nicholls will play in the XI.

After thumping their respective opponents in the previous series, India and New Zealand are all set to lock horns in Napier on Wednesday. The first of the five ODIs will also witness the international cricket returning to the McLean Park which has produced some high-scoring thrillers in the ongoing Super Smash T20 tournament in the country.

Kane Williamson and Co. will be tested to the hilt against the top-notch Indian side. The Kiwis are normally very tough to beat at home but things could change with the visitors being high on confidence after their exceptional Australia tour. Having said that, the hosts also look up for the challenge as they have brought back their top players after resting them for the Sri Lanka series. Also, the available all-rounder slot is expected to be filled in this series for New Zealand.

The Men in Blue, on the other hand, have a chance to sort out their best combination for the World Cup in this series itself. The pitches in the Kiwi nation are similar to what will be on offer in England later this year and a few high-scoring matches can make them aware of their shortcomings as well. The number four conundrum continues to haunt India after Ambati Rayudu’s failures in Australia but he is expected to slot back in for the series opener with MS Dhoni batting at five.

The pitch is expected to be a featherbed for the batsmen and no less than a graveyard for the bowlers. The recent Super Smash game at the venue witnessed more than 400 runs being scored across 40 overs. Defending a total becomes more difficult on such small grounds and expect the team winning the toss to bowl first. As far as the conditions are concerned, the 3 PM start will lead to the temperatures hovering around 27-28 Degrees Celsius and it will get only cooler in the evening with no chances of rain.

Colin Munro and Martin Guptill will open the innings while Kane Williamson, like his counterpart, is expected to take the number three slot. The veteran Ross Taylor will be key at number four. One of Henry Nicholls and Tom Latham will play. The hosts are considering Nicholls to be a backup wicketkeeper for the World Cup and they might try him out behind the wickets in this series. But Latham is the preferred player for them and it will be interesting to see who gets the final nod.

Colin de Grandhomme is fighting with Doug Bracewell for the all-rounder’s spot. Jimmy Neesham is injured and isn’t part of the squad for the first three matches. Lockie Ferguson looks set to be part of the XI with his express pace while the new ball duo of Tim Southee and Trent Boult is back to cause mayhem together. Mitchell Santner and Ish Sodhi are the spin-twins for the home side.

Rohit Sharma, Shikhar Dhawan and Virat Kohli will continue to remain the top three of the line-up. Ambati Rayudu looks certain to return at the number four slot while MS Dhoni will come in next. Kedar Jadhav, after his match-winning 61*, will retain his place undoubtedly and Dinesh Karthik might have to miss out with the visitors expected to give more match time to Vijay Shankar and Ravindra Jadeja.

Yuzvendra Chahal picked six wickets in the only match he played in the ODIs against Australia. Moreover, the small boundaries in Napier will lead to him retaining his place and keep Kuldeep Yadav out of the team. Bhuvneshwar Kumar and Mohammed Shami are the two best pace bowlers India possess in the squad at the moment.

The prediction is for the team batting second to have an upper hand as defending totals is tough on such small grounds. 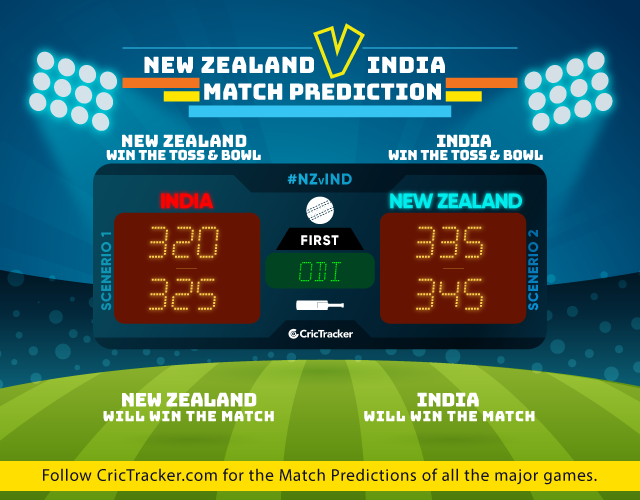