India are yet to win a T20I in New Zealand.

New Zealand and India will be pitted against each other for the second time in Wellington in the last three days. But the format will be different this time. The visitors are yet to win a T20I in New Zealand and the hosts would feel a bit more confident after knowing this record. However, it matters very little when one looks at the current form of the teams. India are on a winning spree at the moment and given their strength in the limited-overs format, it won’t be a cake-walk for New Zealand by any means.

Rishabh Pant and Krunal Pandya are the new exciting faces for this series and have the ability to make an impact straight away. Rohit Sharma will continue to lead the team which has been the case in the shorter formats for India more often than not with Virat Kohli being rested. Nothing much changes for them though as the core part of the ODI team is the part of the T20Is as well and will be confident of doing well.

The Black Caps, on the other hand, were comprehensively beaten in the ODI series by 4-1 and will be looking to make a strong come back now. Though the format is changing, the goal will be to improve with the World Cup in mind which might be the reason why Kane Williamson is also playing this series who had a tough time with the bat in the ODIs.

The pitch for the fifth ODI slowed down considerably in the second innings and this pitch too might behave the same way with the Women’s game also being played on the same pitch just before this match. Having said that, the record favours the chasing teams and it will be interesting to see if the team winning the toss will bowl first. As far as the conditions are concerned, it will be cloudy and windy in Wellington with the 8 PM start and the temperatures will hover in the mid-10s.

New Zealand, in absence of Martin Guptill, are likely to open with the skipper Williamson and Colin Munro. Tim Seifert looks to be the best bet at number three while Daryl Mitchell might be handed over a debut thanks to his exploits in Super Smash. Ross Taylor brings his experience then while Neesham and Colin de Grandhomme will look to blunt the ball in the death overs.

Tim Southee returns to the side while Lockie Ferguson and Scott Kuggeleijn are the other fast bowlers. Even Doug Bracewell is another option while Ish Sodhi is likely to be the lone spinner.

The Men in Blue have a unique problem of playing with three wicket-keepers in the T20Is now. Pant and Karthik are too good to be left out while it is important for Dhoni to play as many games before the World Cup. Shubman Gill might also make his T20I debut at number three with the prospect of Hardik and Krunal, the Pandya brothers, playing for India together for the first time.

The prediction is for the chasing team to win the game and take a 1-0 lead in the series. 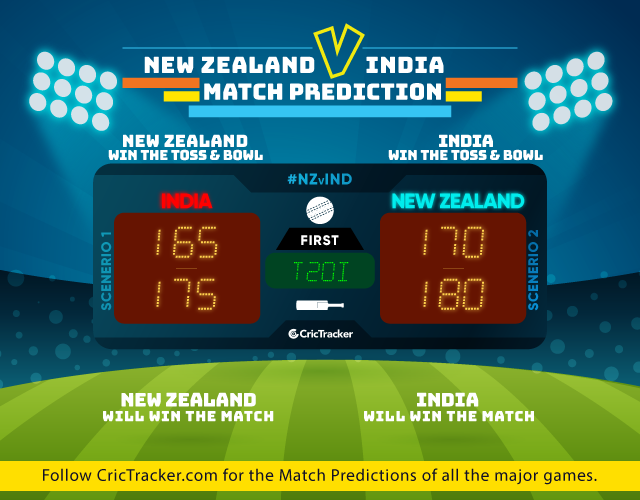