New Zealand has a much better record against Team India in T20Is but the Men in Blue is the in-form unit.

India wrapped up the ODI series 4-1 and it is a fair reflection of how dominating the team has been on this tour so far. In the last match, they won the toss and chose to bat in testing batting conditions which reflected instantly as they were torturing at 18 for 4. Then Vijay Shankar (45) and Ambati Raydu (90) build up decent partnership along with the late flourish of Hardik Pandya to get a defendable total of 252.

The biggest positives for Team India are the all-around performance of Hardik Pandya, Mohammed Shami’s consistency with the ball and Ambati Raydu’s response in tough situations. They do not have a great record against the Kiwis when it comes to T20Is. Out of the 8 matches that the two teams have played, New Zealand have won 6.

The things that excite the most about T20Is are the new faces for both the sides. Rishabh Pant and all-rounder Krunal Pandya are back in the squad along with MS Dhoni and Hardik Pandya from the Indian team. From the New Zealand squad Blair Tickner, Daryl Mitchell who has been excellent for the Northern Knights this year both with the bat and ball have earned a national call.

The pitch is expected to be on the slower side as we had seen in the last ODI that shot making wasn’t as easy and the batsmen had to work hard for the runs.

Choices for captain and vice-captain 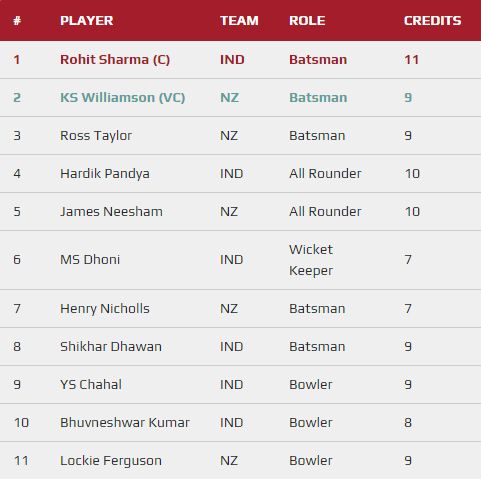 Yuzvendra Chahal can be the captain for your fantasy leagues as he is one of the best spinners in the world and also took 4 wickets on the same pitch, so he can be your Punt.