This is Virat Kohli's last game of the tour.

It is a quick turnaround for both the teams for the third ODI which will be played at the same venue. New Zealand have found themselves in a flux after going 0-2 down in the five-match series and will have to win this match at any cost to stay alive. This will be the last game for Virat Kohli on the tour and Indian captain would love to notch up a century before returning home.

India might bring in Hardik Pandya who was spotted at the Mumbai Airport late on Friday night and must’ve joined the team by now. If, at all, he plays, then will replace Vijay Shankar in the team. New Zealand’s team selections have gone horribly wrong and the decision to leave out Mitchell Santner was shocking. He might come in on the slow track and will be handy on a slow pitch.

The third game of the five-match ODI series between New Zealand and India will be hosted by the Bay Oval in Mount Maunganui.

Good batting track. Spinners get turn towards the end and makes it difficult to chase the same as during the 2nd ODI.

Note: Grandhomme might be sidelined for Santner due to the turn at the Bay Oval.

Note: Dinesh Karthik or Shubman Gill could replace Rayudu who is struggling at No.4. Hardik Pandya can also play depending on his situation (jet-lag).

Kuldeep Yadav has been in great form in this series having picked eight wickets already. He has gone wicketless only in three innings so far since his debut. On the contrary, the chinaman has scalped four wickets four times so far and will be a great pick in the team.

Rohit Sharma and Shikhar Dhawan could be ideal multiplier options given the way they batted in the previous game. If India bats first, there is a possibility of one of them scoring a century this time around. Virat Kohli, Ross Taylor and Kane Williamson are the other options as the trio is due for a big knock. Martin Guptill and Kuldeep Yadav are the potential surprise picks. 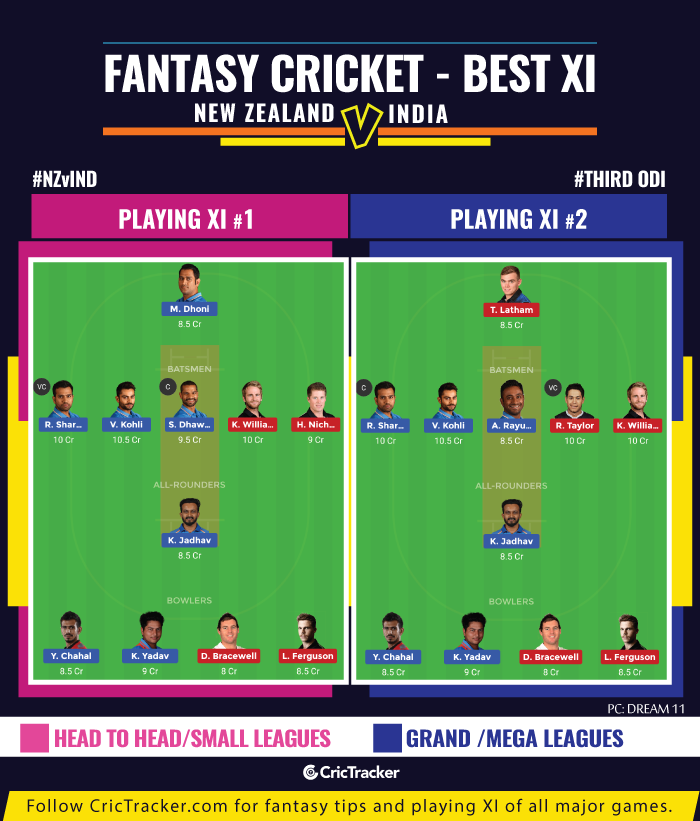 India might be unchanged as Kohli will leave after this game. They would want to seal the series in this match only. New Zealand too might not change except for bringing a spinner as it is a do or die match for them.

On the current form, India are the favourites to seal the series but they cannot afford to take the Kiwis lightly.