With the series all wrapped-up, India will look to chop and change to give their bench players a game.

What started out as an exciting series has now turned into a one-sided affair with India clearly dominating over the home team in all aspects. With the next two ODI matches being academic in nature, it is fair to say that India is at the liberty to give the main players a break and hand the bench a work out. Also, note that Virat Kohli is not with the team after the 3rd ODI and Rohit Sharma will lead India.

Seddon Park, Hamilton. The track here is generally a good one for batting. That said, early moisture could help seamers

Also, note that in the past five ODIs here, the average 1st innings score is 282 and the team chasing has won four times here.

The team is on cloud nine as they appear in fantastic form as a unit. Since the Asia Cup, they are on a good run and they would want to keep up the good work for the next few months. With the IPL and more importantly, the World Cup around the corner, creating a winning habit becomes crucial.

A few changes could be expected. Shubhman Gill and Mohammed Siraj appear highly likely to get a game here. Mohammed Shami might just make way for Siraj.

And the brief layoff doesn’t seem to have hampered Hardik Pandya whatsoever and he creates a good balance with his all-round abilities.

Clearly rattled, the hosts are bound to make changes and to this effect, have roped in Todd Astle and Jimmy Neesham. The ones to miss out are Doug Bracewell and Ish Sodhi.

Martin Guptill: despite a lean patch going into this ODI, NZ will take heart from the fact that Guptill has scored two hundreds and averages 56.45 at Hamilton

Ross Taylor: the veteran seems to have been the only batsman who’s had the measure of the Indian bowlers in some way. The hosts will look up to Taylor for runs yet again 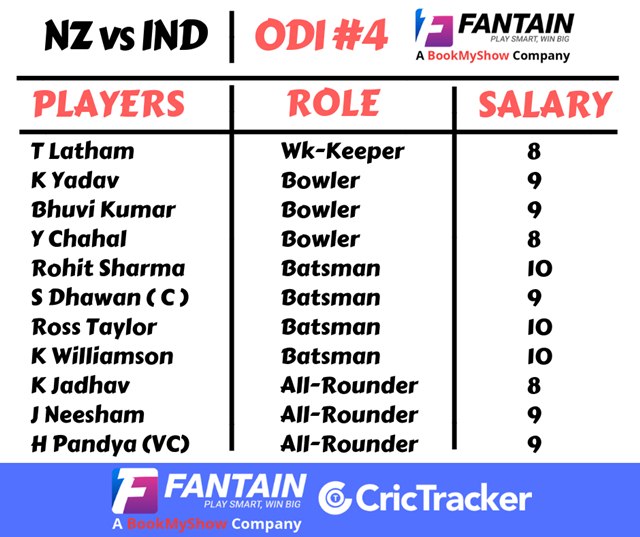 This is our Fantain Fantasy XI but you’re the real expert. So check-in to Fantain, enter the various contests on offer and remember #PlaySmartWinBig

You can now submit your XI in the “Tatkal Contests“.

Watch the toss before the game; note the playing XI’s of both teams and then submit your Fantain Fantasy XI.

How does this help?

That easy guys!! You know who’s playing for sure and therefore, entering the Fantain “Tatkal Contests” only increases your chances of winning BIG.