The team winning the toss will have an advantage as a lot of grass has been left on the pitch.

The second match of the two-match Test series between New Zealand and India will be played from 29 February at Hagley Oval in Christchurch.

India have lost their fourth consecutive international match on this tour of New Zealand. The performance of the Indian team was substandard, to say the least, considering the fact that they are the top-ranked Test side in the world. After a 10-wicket thrashing in Wellington, the Indian skipper Virat Kohli displayed his unhappiness on the lack of the intent of the Indian batters. So, we should expect the visitors especially Cheteshwar Pujara to improve their intent of scoring runs.

Kohli himself has been out of form for a while and would be hungry to lead from the front as the series is on the line. India’s ace pacer Jasprit Bumrah didn’t look in the best of his rhythms again and is a concern for the Indian team management. Mohammed Shami will look to upgrade the level of his performance in the second match.

New Zealand who were whitewashed in their previous Test series have bounced back wonderfully in their den. The Black Caps won previous five Test series at their home, and can’t lose this one either. With confidence being on the seventh heaven and having the home advantage on their side, the Kane Williamson-led side will start this game as the favourites. Neil Wagner is available for this match and will be interesting to see who is axed to accommodate the left-arm pacer in the playing XI.

Among all the teams who have played at least five Test matches at their home since 2016, New Zealand have the best runs per dismissal (43.09) at home, after India. The biggest strength of the hosts is their pace attack, and they might potentially field an all-pace attack in Christchurch. New Zealand have been at the receiving end only once with Trent Boult, Tim Southee and Neil Wagner in their playing XI.

The temperatures during the match time for the five days as follows:

The pitch at Hagley Oval wore a lot of grass on it two days ahead of the match. Even though it will be trimmed, the deck will assist fast bowlers, particularly for the first few days. With the game moving forward after the first day, the batting will get easier. The pitch will be more helpful for the pacers as compared to spinners. It will have good bounce and pace on offer.

Neil Wagner who missed the last match is available for the second match.

Prithvi Shaw has been declared fit for this Test. He was doubtful after missing the training on Thursday due to swollen foot.

Ishant Sharma is set to miss the Test match due to the recurrence of his right ankle injury.

Kane Williamson and Ross Taylor is the most prolific Kiwi batting pair in the longest format. The duo has amassed 3,533 runs with an average of close to 60 in 69 innings. And, their numbers get better in the Kiwi land. While batting together at home, Kane and Taylor have scored 1,414 runs with an excellent average of more than 64 in 27 innings. Even though Taylor (30.85) and Kane (32.80) both average under 35 at the match venue, it will be risky to leave them just on the basis of the poor returns on the concerned ground.

Colin de Grandhomme is a value pick for his cost – 8.5 credits. De Grandhomme contributes well in the lower order at home and is able to pick up a few wickets as well. The right-handed batsman averages over 48 in New Zealand and more than 50 at the match venue. On an average, the medium-pacer snares a couple of wickets in every match in New Zealand.

New Zealand’s pace attack is brilliant and you would think to pick all of them in your fantasy team. Kyle Jamieson has been extremely impressive in his short international career and his selection percentage in Dream11 is more than 75. Boult, Southee and Wagner are fantastic bowlers in their familiar conditions and are the leading wicket-takers in Hagley Oval.

Mayank Agarwal has impressed all in his Test career so far. In the first match, the opening batsman looked determined to survive on the crease and displayed his grit against a quality bowling attack in testing conditions. His selection percentage is close to 70 and is a good pick especially if India bowl first. Virat Kohli has been off-colour on this tour and will look to finish it on a high.

Ajinkya Rahane was the second-best Indian batsman in the first match and has a pretty good record in New Zealand. The vice-captain of India averages over 47 in the Kiwi land and is a pretty reliable option. Ravindra Jadeja, if plays, is a value pick for 8.5 credits. Jasprit Bumrah’s selection percentage is less than 20% but he is a quality bowler. Thus, he could be the differential pick. 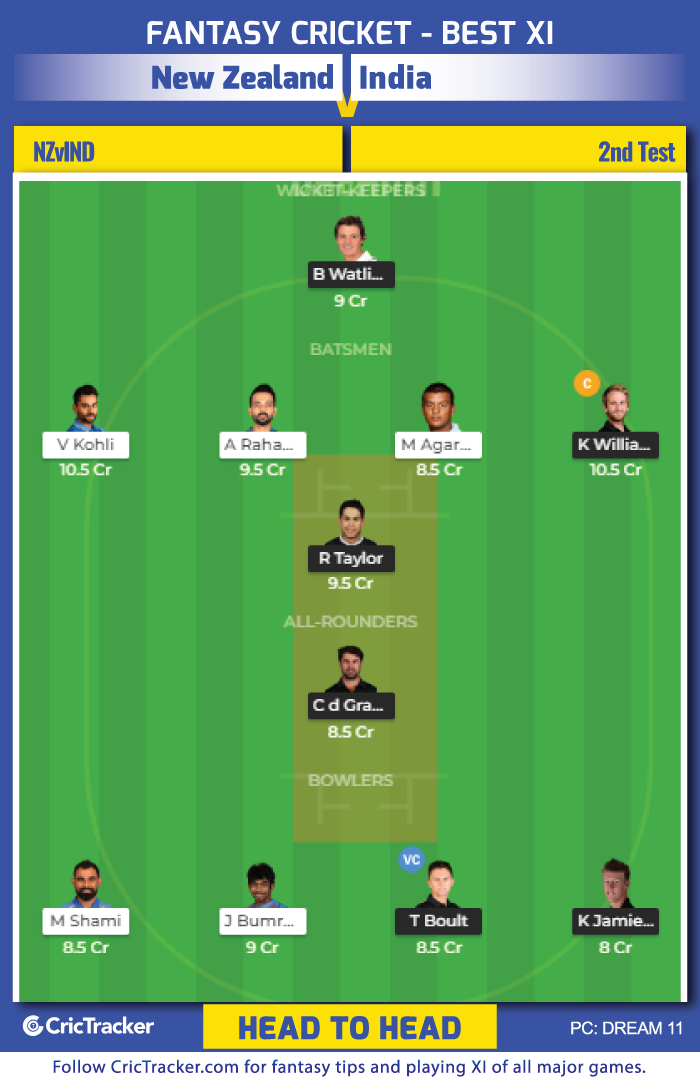 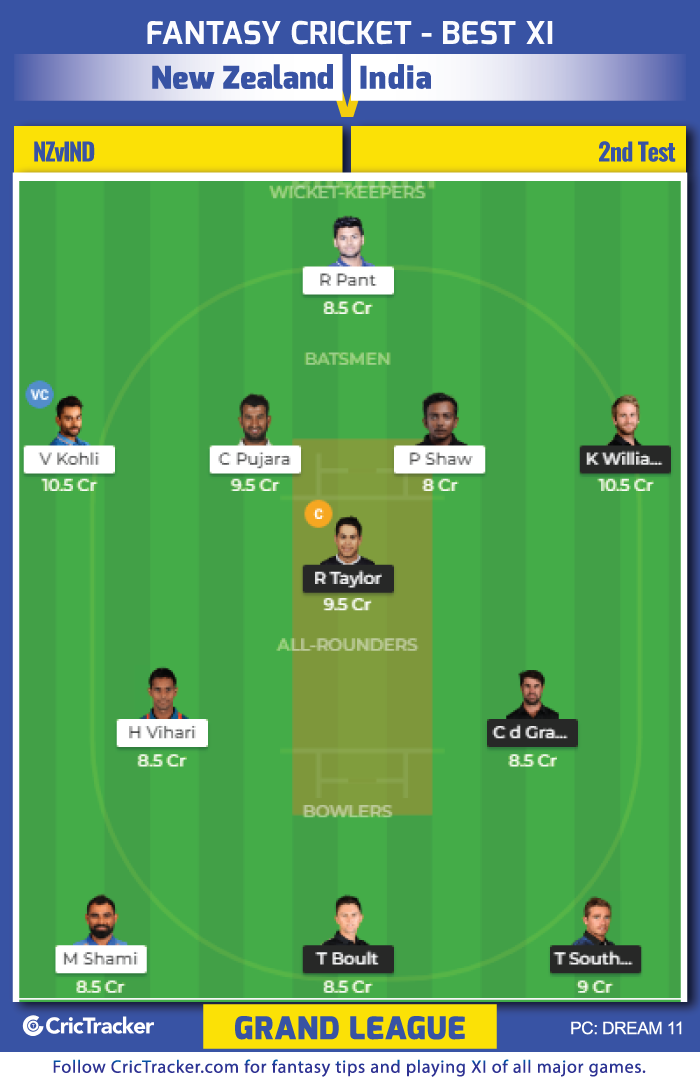 The deck is very green with loads of grass on it and the fast bowlers are expected to have fun, especially during the first two days. Thus, we advise picking the pacers of the team bowling first.

Tim Southee enjoys bowling at the venue having picked 32 wickets in six matches. He can be picked and made captain in Grand Leagues.

The team winning the toss will have an advantage in the game.