Kane Williamson has the best average (77.50) among all the batsmen who have played at least three innings at Seddon Park in Hamilton.

New Zealand won the toss and elected to field first.

The third T20I of the bilateral series between New Zealand and India will be played on January 29 at the Seddon Park in Hamilton.

The Men in Blue have totally dominated the BlackCaps in the latter’s backyard in this series so far. Virat Kohli and co. have stepped up as a unit whereas the hosts have failed to seal the key moments. The brilliance of KL Rahul, Shreyas Iyer and Jasprit Bumrah has guided Team India to win two games. India will try to carry on with momentum and win the third T20I to register their first-ever series win in the Kiwiland.

The Kiwis will look to bounce back and will be favoured by home advantage – at a ground – they boast of a great record. New Zealand have tasted victory in seven out of nine T20Is, they have played at Seddon Park. India have also played one T20I in Hamilton which was series decider last year. In the nail-biting encounter which was a high-scoring game, the Kane Williamson-led side defeated the visitors. So, there are a few positives for the hosts.

The main concern for New Zealand is their pacers. The frontline fast-bowlers of the home side are unavailable due to injury issues. And, in their absence the other pacemen are not doing well – apart from Tim Southee who snared two scalps in the last game.

There are 50% chances of rain in Hamilton on the match-day. However, the showers are expected in the morning and the weather will be clear during the game time. The temperature during the match is expected to range between 19°C and 23°C.

In 18 international T20 innings at this ground, the scoring rate has been more than nine in twelve innings. New Zealand have run rate of less than nine in just one out of nine innings – of 8.65 against South Africa in 2012. Generally, the deck used for T20 matches at Seddon Park is batting friendly. The spinners have an advantage as compared to the pacers here. Recent Super Smash season also witnessed a similar trend.

The top-three comprising of Colin Munro, Martin Guptill and Kane Williamson will be preeminent picks as far as Kiwi batsmen are concerned. All the three batters boast a great record at this stadium. In Hamilton, the right-handed opening batsman is the top-scorer in the shortest format and has crossed the 40-run mark in each of his innings.

Guptill’s partner-in-crime — Colin Munro played a match-winning knock of 72 runs off just 40 balls against the same opponent last year at this ground. Kane Williamson has the best average (77.50) among all the batsmen who have played at least three innings at Seddon Park in Hamilton. The skipper who scored a half-century in the first T20I is also expected to step up in a do-or-die match for his team. Mitchell Santner and Tim Southee will be crucial with the ball for New Zealand

The man in form – KL Rahul is the most selected player in Dream11 for this match and is a must-have in the small-leagues. Rohit Sharma has below-par numbers against New Zealand in the white-ball format, particularly in T20Is. It will be a good opportunity for the Hitman to better his stats against the Blackcaps. Also, the opening batsman has failed to play a big knock in two consecutive matches.

Thus, a big knock might be on the cards. The ever-consistent Virat Kohli is also a popular choice, as always. The Indian captain is also a must-pick in the small leagues, and leave him on your own risk. With the ball, Yuzvendra Chahal and Jasprit Bumrah could be key for India. 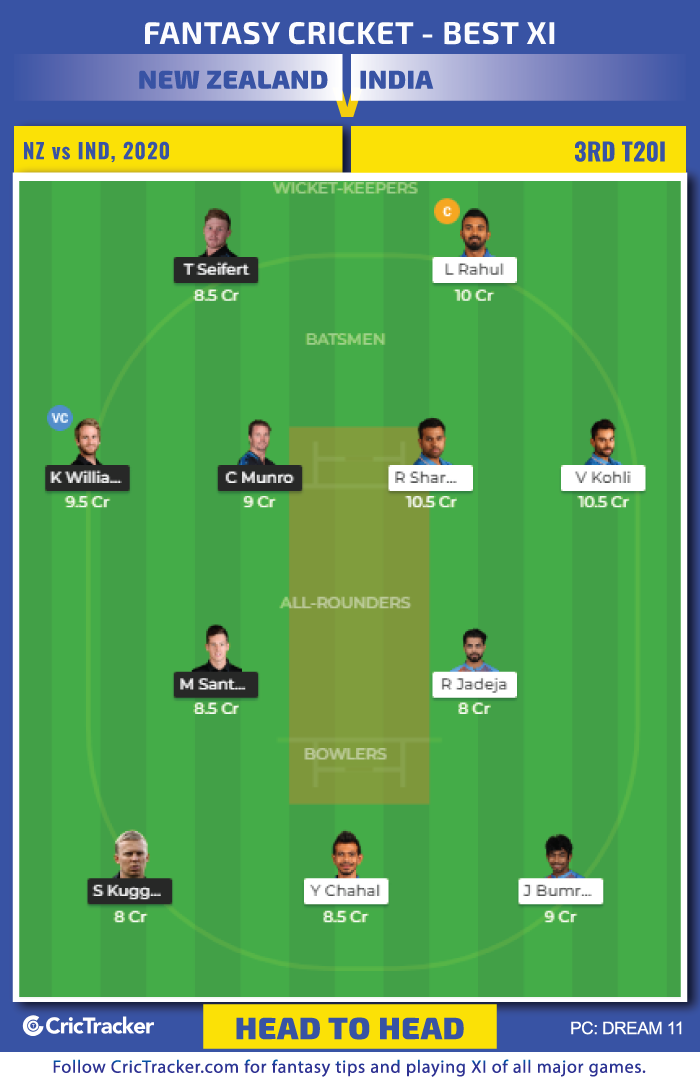 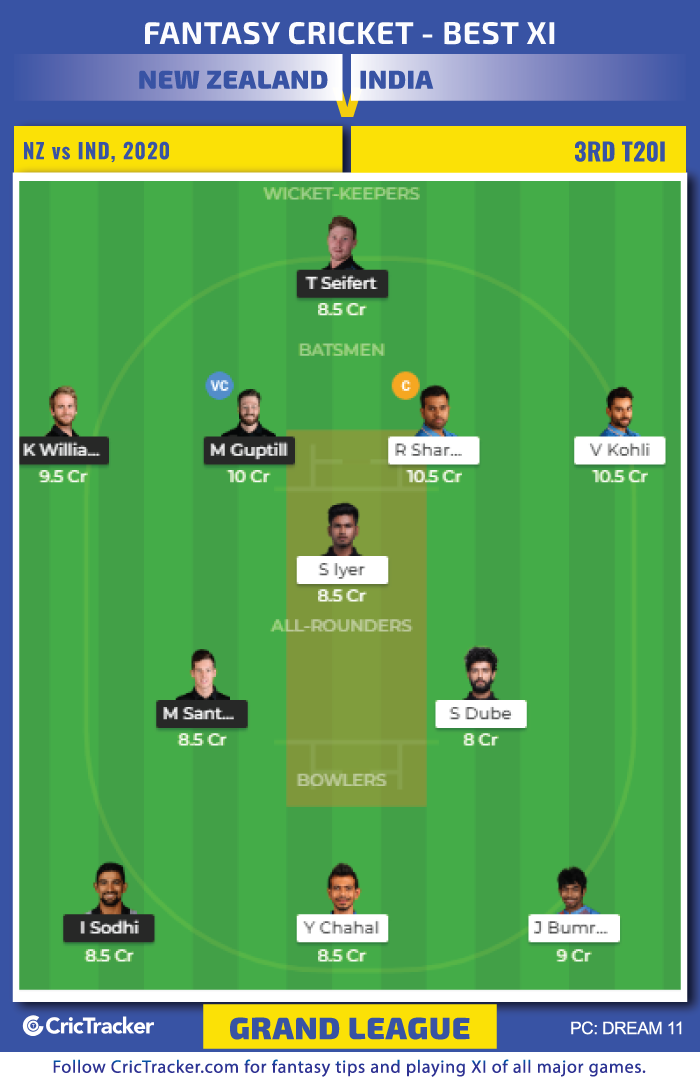 As the graphic shows that the spinners have done better than fast bowlers on this ground in international T20 cricket. So, pick spinners like Yuzvendra Chahal, Mitchell Santner and Ish Sodhi. Ravindra Jadeja who has done well in this series so far is also a good option.

Whilst India’s ace pacer Jasprit Bumrah has picked up just one wicket in this series so far, we don’t recommend to leave him. KL Rahul and Shreyas have been in good form and have scored runs consistently. So, it will be a good risk to drop them in the grand leagues.

India are expected to win the game and seal the series.