The boundary size of the Westpac Stadium is not very large and a high-scoring contest might be on the cards.

The fourth match of the T20I series between New Zealand and India will be played on 31 January at Westpac Stadium in Wellington.

We witnessed a classic T20 thriller in the previous match at Seddon Park in Hamilton. Virat Kohli’s men have taken an unassailable lead of 3-0 in the five-match series. The Indian skipper spoke in the post-match presentation that Washington Sundar and Navdeep Saini will get an opportunity in the next game. The off-spinner Sundar will probably ahead of Ravindra Jadeja. Either one of Mohammed Shami and Jasprit Bumrah will be rested to bring in the speedster Saini.

Whilst the visitors will be trying out other players, the hosts will play to save their pride. The swashbuckling opening batsman Martin Guptill has got fair starts in all the games but has failed to convert them into a huge knock. The Indian pacers have targeted Colin Munro by short balls directed towards the body, particularly in the past two games. However, the southpaw has failed to come up with a solid plan to encounter that.

The Blackcaps are invincible at the match venue in the shortest format of the game since 2014. They also registered a victory by 80 runs against India last year and will try to carry on their dominance.

There are 10% chances of rain around 11:00 P.M. local in Wellington. Thus, we should expect a complete match. The temperature will hover between 18°C to 20°C at the game venue.

The pitches used in this stadium are drop-in decks and are batting friendly. Generally, the drop-in pitches have hard surfaces, thus, hit-the-deck-hard pacers should get some assistance in the game. The boundary size of the Westpac Stadium is not very large and a high-scoring contest might be on the cards.

Tom Bruce will replace Colin de Grandhomme in New Zealand’s squad for the next two matches. CDG was picked in the squad only for the first three games.

Kane Williamson has been ruled out of the match due to left-shoulder injury.

Martin Guptill has scored thirty or more in each match of this series and has looked in a good rhythm. Thus, a big score might be around the corner from Guptill and is a good pick in the fantasy side. Tim Seifert may bat at number three in Williamson’s absence. Among bowlers, Tim Southee and Mitchell Santner will be popular picks. Scott Kuggeleijn was quite impressive in Hamilton and is also a good value pick to manage credit.

KL Rahul is the most selected player in Dream11 again, and it would be quite risky to leave him out. Rohit Sharma was the hero for India in the third T20I and is among the popular choices. Pick him if you can manage credit. Very much like Martin Guptill, Virat Kohli is yet to play a big knock in this T20I segment. Thus, a Kohli special might be on display in Wellington. Also, the ever-consistent batsman provides the security of consistency and is the most reliable pick. Among bowlers, Yuzvendra Chahal and Mohammed Shami can offer healthy points. If Jasprit Bumrah isn’t rested, we recommend to pick him. 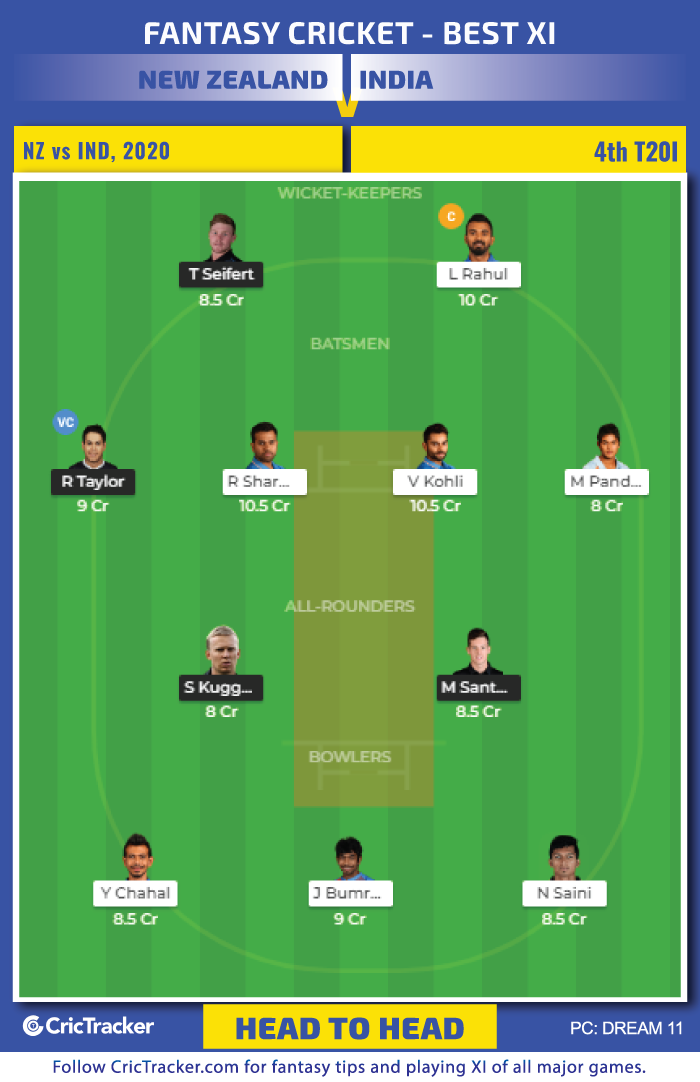 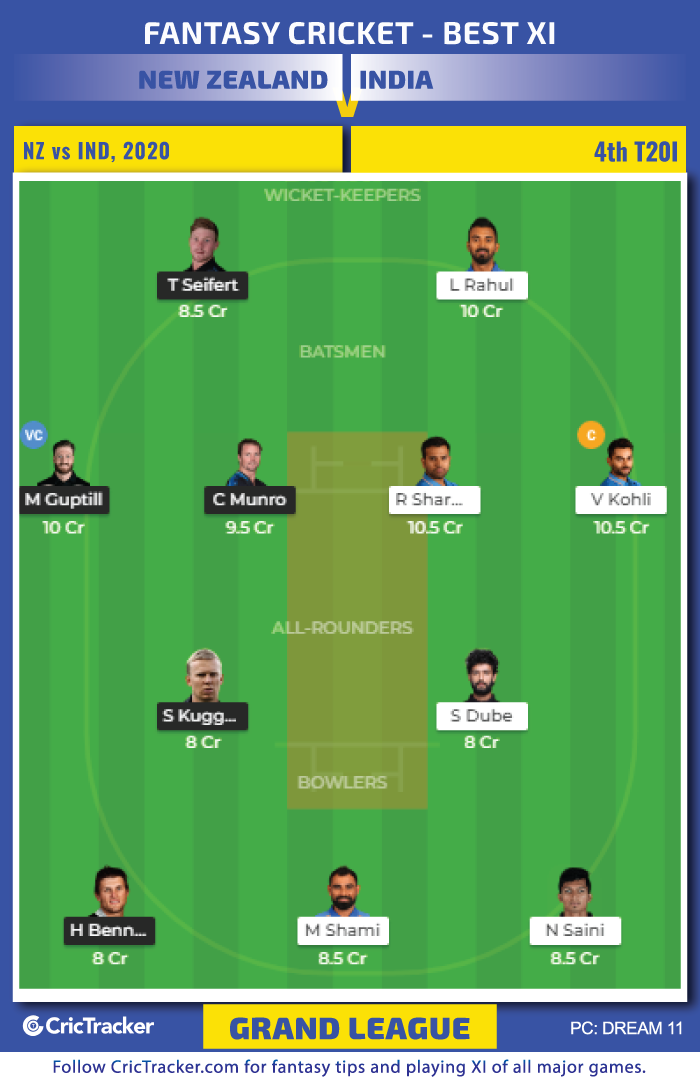 Navdeep Saini who is quite certain to play the fourth T20I has been very imposing in his short international career so far. As mentioned in the pitch report, the deck might support hit-the-deck-hard kind of bowlers, the gun pacer is a good player to have in the Dream11 side for this match.

Tim Seifert likes to play on this ground and can turn out to be an excellent pick, especially in the grand leagues and a differential in the small-leagues as well. In four matches at Westpac Stadium, Seifert has a sublime average of 60 and a whopping strike rate of close to 180. He also played a match-winning knock of 84 runs against the same opposition at the same ground last year. The wicketkeeper-batsman has a low selection percentage and is an excellent punt for this match if the Kiwis bat first.

We predict India to win this match and extended their lead by 4-0.