All the five T20Is at the Bay Oval have been won by the team, batting first.

India have already taken a 4-0 lead in the five-match series against New Zealand. Hence, the fifth and final T20I on Sunday, February 02 at the Bay Oval in Mount Maunganui is nothing, but a dead rubber. However, the Black Caps have played better than what the scorecard would suggest. Out of the four matches, the second T20I at the Eden Park in Auckland was the only one-sided affair.

In the other three games, the Kiwis gave the Men in Blue a run for their money. The rub of the green hasn’t gone in the hosts’ favour thus far. In Hamilton and Wellington, India edged out the home team after the contests went into the Super Over. The series could easily have been 2-2 with the last match being the decider. But that’s not the case anymore as the Kiwis will take the field for pride.

The pitch at the Bay Oval in an absolute belter for batting. Even as the average score in T20Is is 185, the average increases to 201 while batting first. The average comes down to 165 while chasing. The team, batting first have won all the five T20Is thus far. Out of those games, the Black Caps have won four times. There are no chances of rain with the temperature around the 24 degrees Celsius mark.

Kane Williamson missed the previous game due to injury on his left shoulder. If he returns then the axe may come down on Daryl Mitchell, who succumbed to pressure in Wellington. Williamson’s return may also mean that Tim Seifert has to go down the order even after notching a half-century.

Colin Munro is in excellent form with 163 runs, but his opening partner Martin Guptill has flattered to deceive to some extent. Ross Taylor has been reasonable, but could’ve done better in the last two matches. Ish Sodhi has been the Black Caps’ standout bowler with six wickets at an economy of 7.37.

The visitors may again bring in quite a few changes. Rohit Sharma is likely to return and Virat Kohli may rest himself with the former in charge of captaincy. Sanju Samson may get another chance after failing in the previous game. Rishabh Pant would be hoping to get a game after warming the bench.

Pant may come in place of Shivam Dube, who has played all four games thus far. Manish Pandey is high on confidence after raking up a half-century. India may give Jasprit Bumrah some rest and bring back Mohammed Shami. Shardul Thakur and Navdeep Saini should retain their spot in the team. 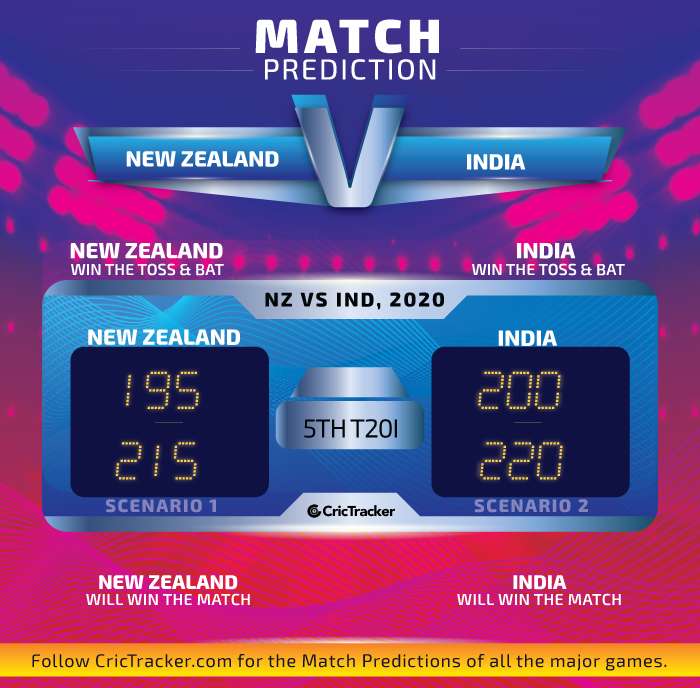