Will India make any changes to their line-up?

The stage is set for a cracking decider at the Seddon Park in Hamilton between India and New Zealand. Both the teams were clinical in their respective victories earlier in the series and would be aiming to end the tour on a high now. The visitors, especially, would be keen to get on the park and put up a commendable display to end the long Trans-Tasman tour on a positive note.

The Kiwis, on the other hand, will be desperate for the series victory after the way they were thrashed in the ODIs. The Black Caps looked more comfortable in the shortest format and Kane Williamson will be hoping that his troops repeat the fourth ODI heroics by skittling the star-studded Indian batting. Though they will miss Trent Boult who wreaked havoc then and will expect Tim Southee to do the job.

India will breathe easy definitely to know that Boult isn’t playing this game and even Lockie Ferguson has been rested for the final game. They kept faith in the same group of players after a thumping loss in the series opener and they delivered. Khaleel Ahmed bowled well while the batsmen also stood up to the challenge picking key wickets. Krunal Pandya’s exceptional show in Auckland should rest all the debate about his place in the side.

The average score batting first at the venue has been 168 and the pitch is generally good to bat apart from the fact that the new ball swings a fair bit. As far as the temperature is concerned, it will be a bit cloudy on Sunday in Hamilton and there is a slim chance of rain making its presence felt.

Blair Tickner comes into the equation for this game with Ferguson rested. The rest of the line-up should look the same with Colin Munro and Tim Seifert opening the innings and Kane Williamson at number three. Daryl Mitchell deserves another go after being hard done by the third umpire in Auckland. Colin de Grandhomme’s return to form must have delighted the Kiwis while Tim Southee, Mitch Santner and Ish Sodhi are expected to take care of the bowling attack.

It’s very hard to predict the Indian team. Though they would love to go in with the same combination after a victory. Having said that, Shubman Gill might be given a go-ahead of Vijay Shankar who has now played a few matches on this tour. There is also an option of Kuldeep Yadav getting a chance but Rohit Sharma already cleared at the toss in the previous game that they want to try other players.

The prediction is for the Indian team to win the game and series. 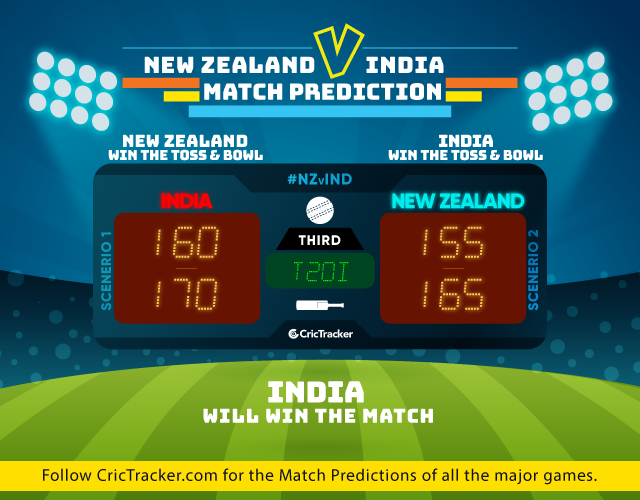