Although this encounter might seem to be a dead rubber, there is a lot at stake for both the teams given that the World Cup 2019 is just around the corner.

Only for the second time in the history of the game, Team India managed to clinch an ODI series while playing in New Zealand. They did so after a gap of 10 years as the Men in Blue won each of the first three ODIs in the five-match series to take an unassailable lead. The two teams will meet again at the Seddon Park in Hamilton for the fourth match of the series.

Although this encounter might seem to be a dead rubber, there is a lot at stake for both the teams given that the World Cup 2019 is just around the corner. The visitors will enter into this game under the leadership of Rohit Sharma and have got quite a few options that are to be tried out. New Zealand, on the other hand, have a massive challenge ahead. It is important for them to regain the confidence as they only play just three more ODIs against a relatively weaker Bangladesh side before the mega-event.

A game is being played at the Seddon Park after nearly a year. The track at this venue assists the batsmen and scores in excess of 250 are quite common. The teams chasing here at this venue have found a great deal of success in the last five ODIs. The weather is predicted to be cloudy in the afternoon with strong winds blowing around. The chances of precipitation are quite low.

New Zealand axed Ish Sodhi and Doug Bracewell from the squad for the last two ODIs. James Neesham is back in the after sustaining an injury earlier. He could be included in the eleven straightaway while one between Tim Southee and Todd Astle will be picked. The rest of the side is expected to be the same. The openers have got to shoulder more responsibility and should play sensibly.

Rohit Sharma is slated to lead the side in what will be his 200th ODI game. India could hand over the debut cap to Shubman Gill who is likely to replace Virat Kohli. Also, MS Dhoni is expected to return as he was spotted training during the practice session. One among Kedar Jadhav and Dinesh Karthik is to be chosen.

Karthik is the likely player to get an opportunity as he was on the bench for the most part of the Australia tour. Mohammed Shami, who has been playing non-stop cricket could be rested and Khaleel Ahmed can get another lease of life to stake a claim as the backup pacer.

The prediction is that India will win. 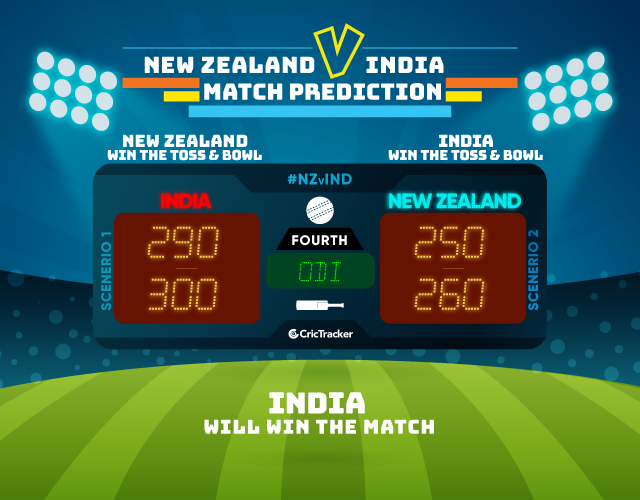